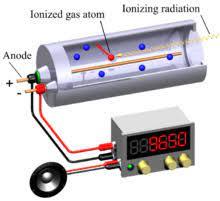 A Geiger Muller Tube is a device use to detect ionizing particle or nuclear radiation. It consists of glass cylinder G coated with a metal inside it as the cathode C. A metal wire runs along the axis of the cylinder as anode A, as shown in the figure. The cylinder is filled with gas such as argon mixed with halogen vapour at low pressure of about 10cm of Hg. The tube has very thin mica end window W shielded by a protective gauge P. 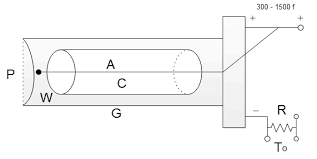 The high tension source supplies a potential difference of value little less than the ionizing potential of the gas through the resistance R.

When a single ionizing particle, like a beta particle or gamma photon, enters tube, through the window W, it will produce the ionization of gas. The p.d. applied accelerates the ions towards the electrodes which produce more ions making collisions with gas molecules.  So, an avalanche of ions is produced inside the tube which rushes towards the electrodes and produce a current in the external resistance R. The resulting drop in potential across R reduces the potential across the tube below the threshold value and the current decays rapidly as the circuit has as a small time constant. This momentary surge of current produces an electric pulse which corresponds to one particle  entering the counter. The successive current pulses generated in the resistance R, corresponding to the number of ionizing particle passing into the tube, are detected and counted by a suitable arrangement.

The radioactive particles emitted from a given sample in a given interval of time can be counted by placing the sample at some distance from the window.