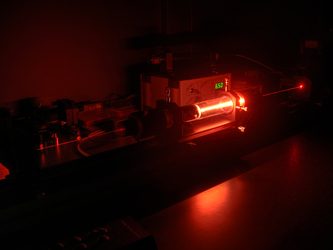 He - Ne laser is the gas laser which consists of highly evacuated discharge tube. The tube is filled with He and Ne in the ratio of 5:1 with a pressure of 1mm of Hg i.e.1 torr. The angles of the tube are cut in a certain angle called the Brewster's angle. Two  electrodes with high voltage supply are connected to it. Two plane mirrors are kept at the ends of the tube facing the discharge tube. One of the two mirrors is 100% reflecting and the other is partially reflecting i.e. about 98%.

When He at excited state collides with Ne at ground state, He loses energy while Ne gains energy. No photons are produced as there is no energy left to produce photons. He helps attain population inversion in Ne atoms. After gaining energy, Ne goes to excited state. When atoms at excited energy level with long mean life jump to lower energy level with energy, E = E2 - E1 due to influence of induced photons with energy same as that of incident photon, then such emission is called stimulated / induced emission. 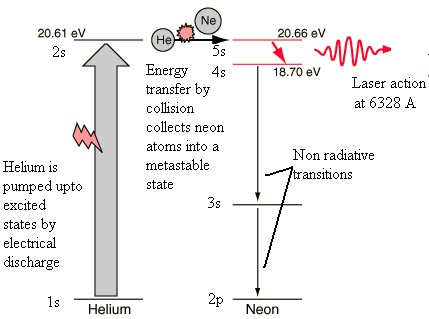 Some of the uses of Laser are:

1.It is used in holography.

2.It is used in piercing holes.

4. It is used in medicines.

5.It is used in scientific research.

6.It is used in radio communication in outer space.