The Brain and its Functions 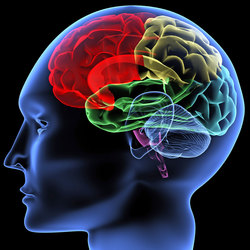 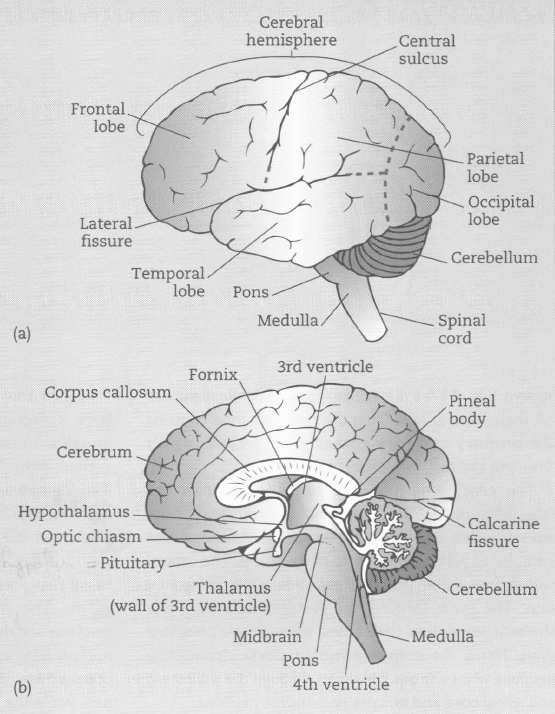 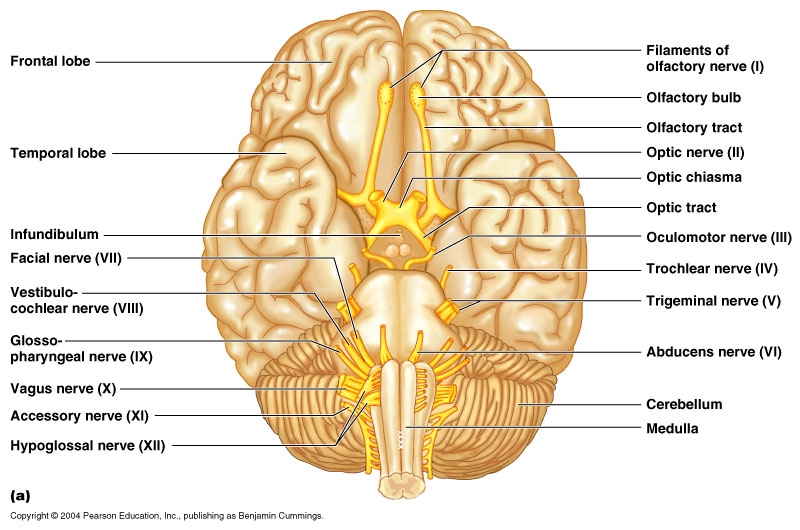 The brain is the anterior-most part of the central nervous system. It is located inside the cranial cavity. It weighs 1220-1400 grams.

It has the following meninges/protective coverings.

1)Dura mater: It is the outermost, tough, thick, and fibrous covering.

2)Arachnoid mater: It is the middle, thin layer.

3)Pia mater: It is the innermost, thin, and vascular layer. 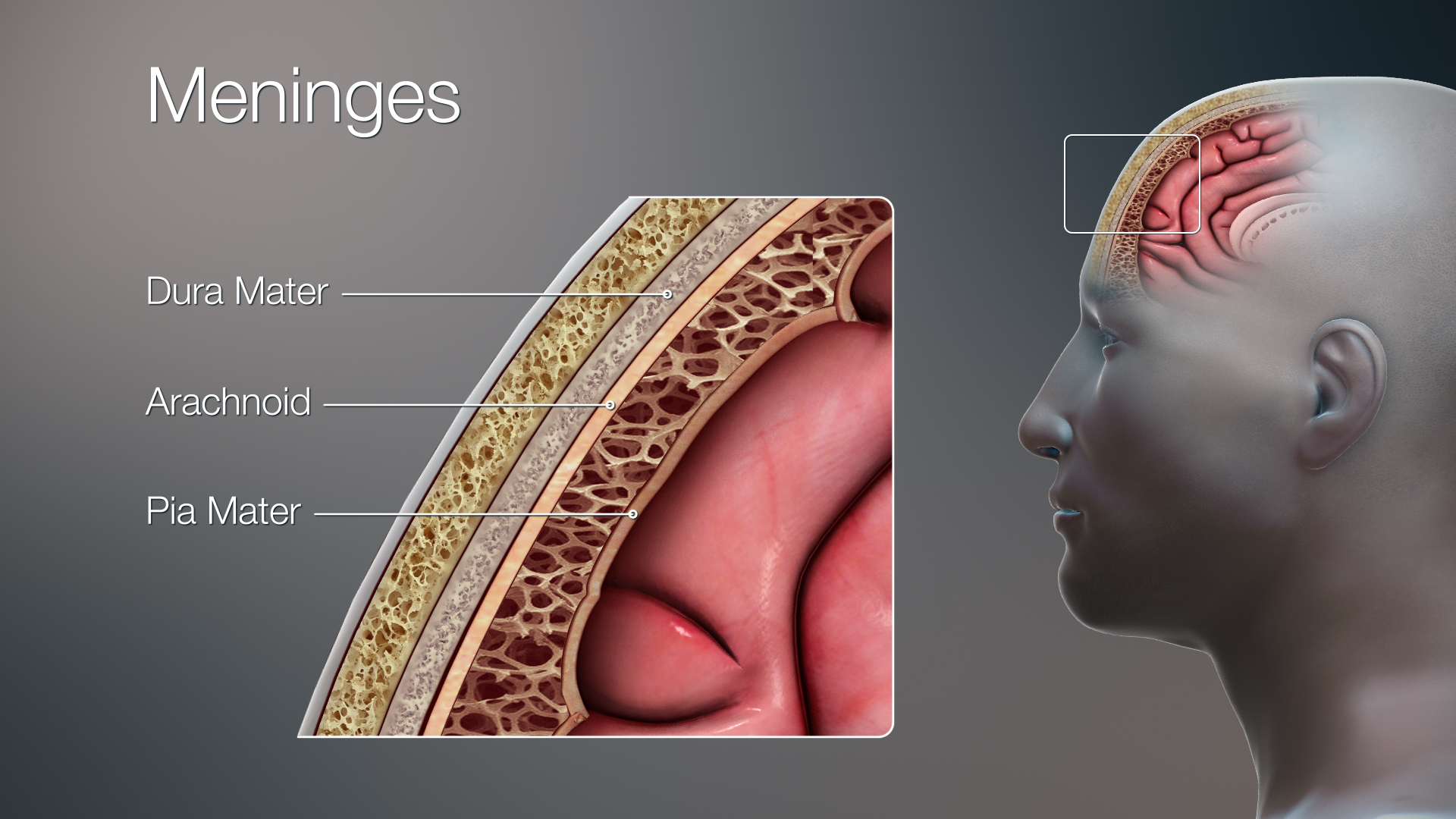 The parts of the brain are as follows. 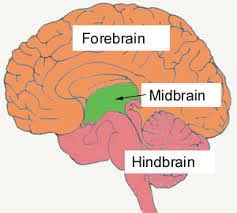 The fore-brain is described below.

2)Cerebrum: It is the largest and most complicated part of the brain. A longitudinal fissure separates it into two cerebral hemispheres. Each hemisphere has four lobes:-frontal, parietal, temporal, and occipital. The hemispheres are bound together by a nervous tissue called the corpus callosum. The cerebrum has upward folds called gyri and downward ridges called sulci. The major sulci are central sulcus(between frontal and parietal lobes), lateral sulcus(frontal and temporal sulcus) and parieto-occipital sulcus(parietal and occipital sulcus). 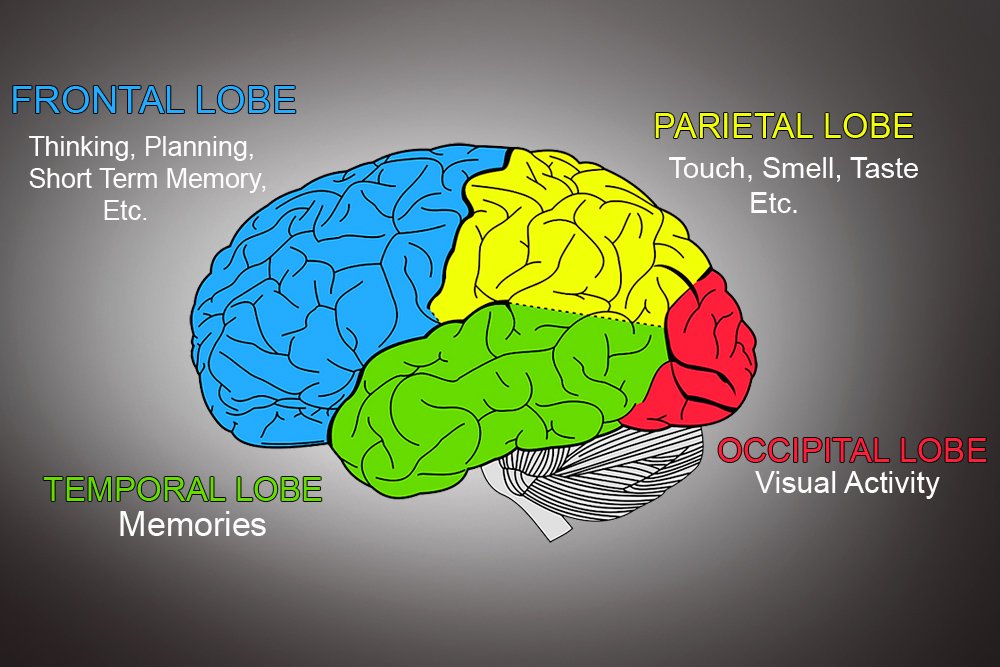 3)Diencephalon: It lies below the corpus callosum and above the mid-brain. It has three parts described below.

i)Epithalamus: It is the vascular anterior part that is not made of nervous tissue. It has an anterior fold called anterior choroid plexus that secretes cerebrospinal fluid.

ii)Thalamus: It contains the optic chiasma formed by the crossing of optic nerves.

iii)Hypothalamus: It is connected to the hypophysis/pituitary gland by the infundibulum. It has round nipple-shaped structures behind it called mammillary bodies.

The mid-brain is described below.

2)Crura cerebri/cerebral pendulum: It is a bundle of nerve fibers located at the lower part of the mid-brain.

The hind-brain is described below.

1)Cerebellum: It has two hemispheres called cerebellar hemispheres. It has a central worm-like structure called vermis and a branching structure made of grey and whiter mater called arbor vitae or tree of life.

2)Pons varoli: It acts as the bridge between the following.

3)Medulla oblongata: It arises from the pons varoli and extends to the spinal cord. It has a thin, non-vascular fold called the posterior choroid plexus that secrets cerebrospinal fluid.

1)      Olfactory lobes: They are concerned with the sense of smell. The olfactory lobes are not well developed in human brain.

ii)                   Hypothalamus: It is the main coordinating and control center for autonomic nervous system. It helps to maintain homeostasis. It provides anatomical connection between nervous and endocrine system by its relationship to be pituitary gland.

5)      Crura cerebri: They relay impulses back and forth between cerebrum, cerebellum, pons varoli and medulla.

6)      Cerebellum: It is concerned with the coordination of the actions of muscles. It maintains posture and equilibrium.

7)      Pons varoli: It relays impulses between medulla oblongata and superior part of the brain, between the hemispheres of the cerebellum and between the cerebrum and cerebellum.

8)      Medulla oblongata: It receives and integrates signals from the spinal cord and sends signals to the cerebellum and thalamus.