The Ear and its Functions 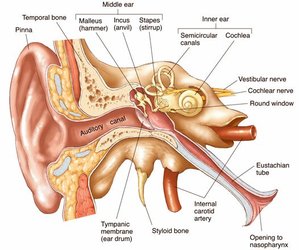 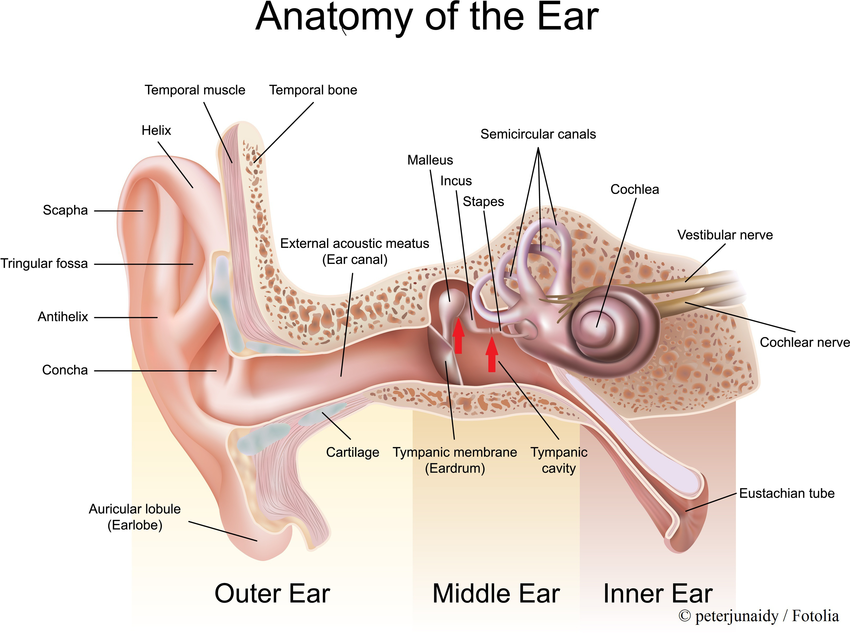 The ear is a phonoreceptor and balancing organ located on either side of the head. It has the following regions.

1)External Ear: It has the following regions.

i) Pinna: It is a projecting elastic cartilaginous structure covered with skin. It has an outermost prominent ridge called helix and a soft, flexible lobule. The pinna helps in collecting sound waves.

ii)External auditory meatus: It is a tubular passage supported by cartilage in the anterior part and bones in the internal part. It is lined by hairy skin(stratified epithelium) and ceruminous glands, which are modified sweat glands. They secrete a substance called cerumen or ear wax.

i)Tympanic membrane: It is a thin oval, a semi-transparent membrane made of elastic connective tissue. It is capable of vibrating. It lies at the end of the external auditory meatus and separates it from the tympanic cavity. It is also called the eardrum.

ii) Tympanic cavity: It is an air-filled cavity that communicates with the nasopharynx with the help of the eustachian tube or auditory tube. The Eustachian tube equalizes pressure on both sides of the tympanic membrane.

iii) Ear ossicles: It contains 3 small bones held together by cartilages and muscles. They are hammer-shaped malleus, anvil-shaped incus, and stirrup-shaped stapes. Malleus is the largest ossicle and the stapes is the smallest bone of the body The malleus is attached to the eardrum, the incus is attached to the malleus and the stapes is connected to the fenestra ovalis. The ossicles transmit vibrations from the external to the internal ear.

iv)Openings: The middle ear is connected to the internal ear by two openings.

3)Internal Ear: It is a membranous structure that is also known as the membranous labyrinth. It is enclosed in a bony cavity filled with perilymph. It has the following structures.

i) Semi-circular canals: There are three canals, one anterior, one posterior, and one lateral. They are at right angles to each other. They arise from the utricle. Anterior and posterior canal arises from the crus commune. They are swollen at one end and form the ampulla. The ampulla contains sensory spots called cristae. Each crista has two kinds of cells: the sensory cells and the supporting cells. The sensory cells have sensory hairs and nerve fibers. The semi-circular canals help in balancing the body.

ii)Vestibule: It contains dorsal and ventral sac-like structures called utricle and sacculus respectively. They are connected by a utricular-saccular duct. They contain sensory spots called macula. They are lined by otolith membranes and contain otolith. Otoliths are crystals of calcium carbonate suspended in fluid. Macule is concerned with the balance of the body.

iii)Cochlea: It is the main hearing organ connected to the sacculus by a  duct called ductus reunions. It is a coiled tubular structure that resembles a snail. It contains three fluid-filled compartments. The upper-scale vestibule and lower scala tympani are filled with perilymph. They come in contact with each other at the apex of the cochlea by a duct called helicotrema. The fenestra rotunda lies in contact with the scala tympani and the fenestra ovalis lies in contact with the scala vestibule. The scala media is the middle and most important compartment. Its upper membrane is called Reissner’s membrane and the lower membrane is called the basilar membrane. The scala media is filled with endolymph. A sensory ridge called the Organ of Corti is present on the basilar edge. The tectorial membrane hangs over the Organ of Corti and determines the pattern of vibration of sound waves. The Organ of Corti contains the following cells: outer hair cells, inner hair cells, pillar cells, cells of Claudius, cells of Hensen, and cells of Deiter.

Functions of the Ear

1)      Hearing: The sound waves are collected by the external ear. They pass through the external auditory meatus to the tympanic membrane, which vibrates. The vibrations are transmitted across the middle ear by the malleus, incus to the stapes. The stapes fits into the fenestra ovalis. The perilymph of the internal ear receives the vibration through the membrane covering the fenestra ovalis. From the perilymph the vibrations are transformed to scala vestibulei of cochlea and then to scala media through Reissner’s  membrane. Thereafter, the movements of endolymph and tectorial membrane stimulate the sensory hairs of Organ of Corti. The impulses received by hair cells are carried to the brain through auditory nerve where the sensation of hearing is felt.

2)      Equilibrium: The semicircular canals, utricle and saccule of membranous labyrinth are the structures of equilibrium. When an animal gets tilted or displaced, the hair cells of christae and macula are stimulated by the movement of the endolymph and otolith. The stimulus is carried to the brain through auditory nerve and the change of the position is detected by the medulla oblongata of the brain. The brain then sends impulses to the muscles to regain control. 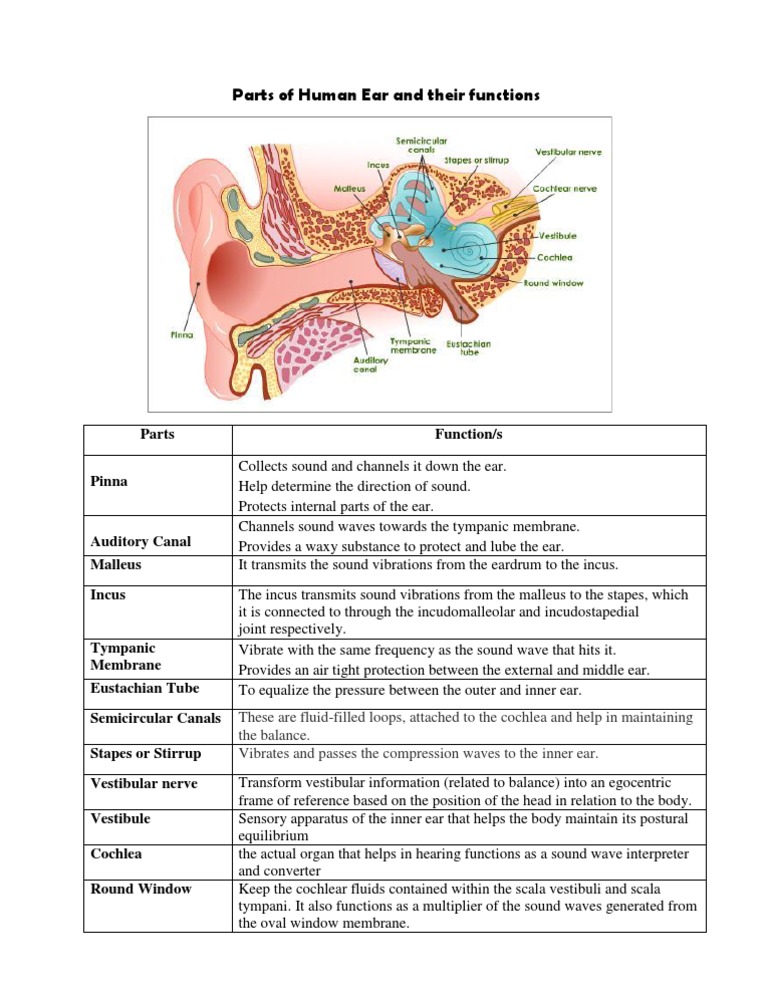