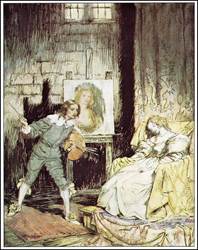 Edgar Allan Poe (1809-1849) was an American writer, poet, literary critic, and editor. Poe is best known for his poetry and short stories. He is widely regarded as a central figure of Romanticism in the United States and of American literature as a whole. He is generally considered the inventor of detective fiction and is further credited with contributing to the emerging genre of science fiction. He is famous for his dark, mysterious poems and stories.

“The Oval Portrait” The Oval Portrait is a short horror story by Edgar Allan Poe which deals with the theme of the relationship between art and life. 'The Oval Portrait' was first published as a longer version titled ‘Life in Death’ in Graham's Magazine in 1842. The shorter version, renamed ‘The Oval Portrait’ was published in the April 26, 1845 edition of the Broadway Journal. This is the story of an artist who wants to make a painting of his young wife but becomes so obsessed with it that he doesn’t realize his wife is dying meanwhile. This is a short horror story about the relationship between art and life, through the narrator’s encounter with the oval portrait of a young woman in a chateau in the Apennines.

The narrator is wounded and delirious and has sought shelter in an old mansion with his manservant; Pedro. He holes up in one of the rooms, and contemplates the strange paintings adorning the walls of the room, and reads a small book he had found on the pillow of the bed, which contains information about the paintings. At around midnight, he adjusts the candelabrum in the room and his eye catches a portrait he hadn’t previously noticed, in an oval shape frame depicting a girl on the threshold of womanhood. The narrator is captivated by the portrait which seems so lifelike, but he soon becomes appalled by it. He turns to the book and reads the entry detailing the history behind the oval portrait. The woman depicted in it was a young bride of the painter and was a perfect wife in every respect - except that she was jealous of a husband's art that distracted him from her. The artist paints a picture of his wife and becomes more obsessed with capturing her likeness. The wife remains in a humble and obedient pose for many weeks. Her health becomes increasingly poor as the work continues. She becomes weaker and weaker, dispirited from losing her husband’s love as he stops paying attention to her and becomes more preoccupied with the painting. When the portrait is about to finish, the artist is delighted with the quality of his own work. He then looks at his wife but finds that she is dead.

the symbols in this chapter are :