The Eye and its Working 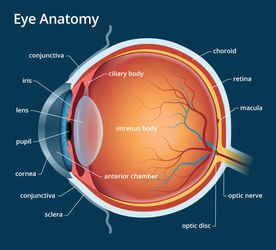 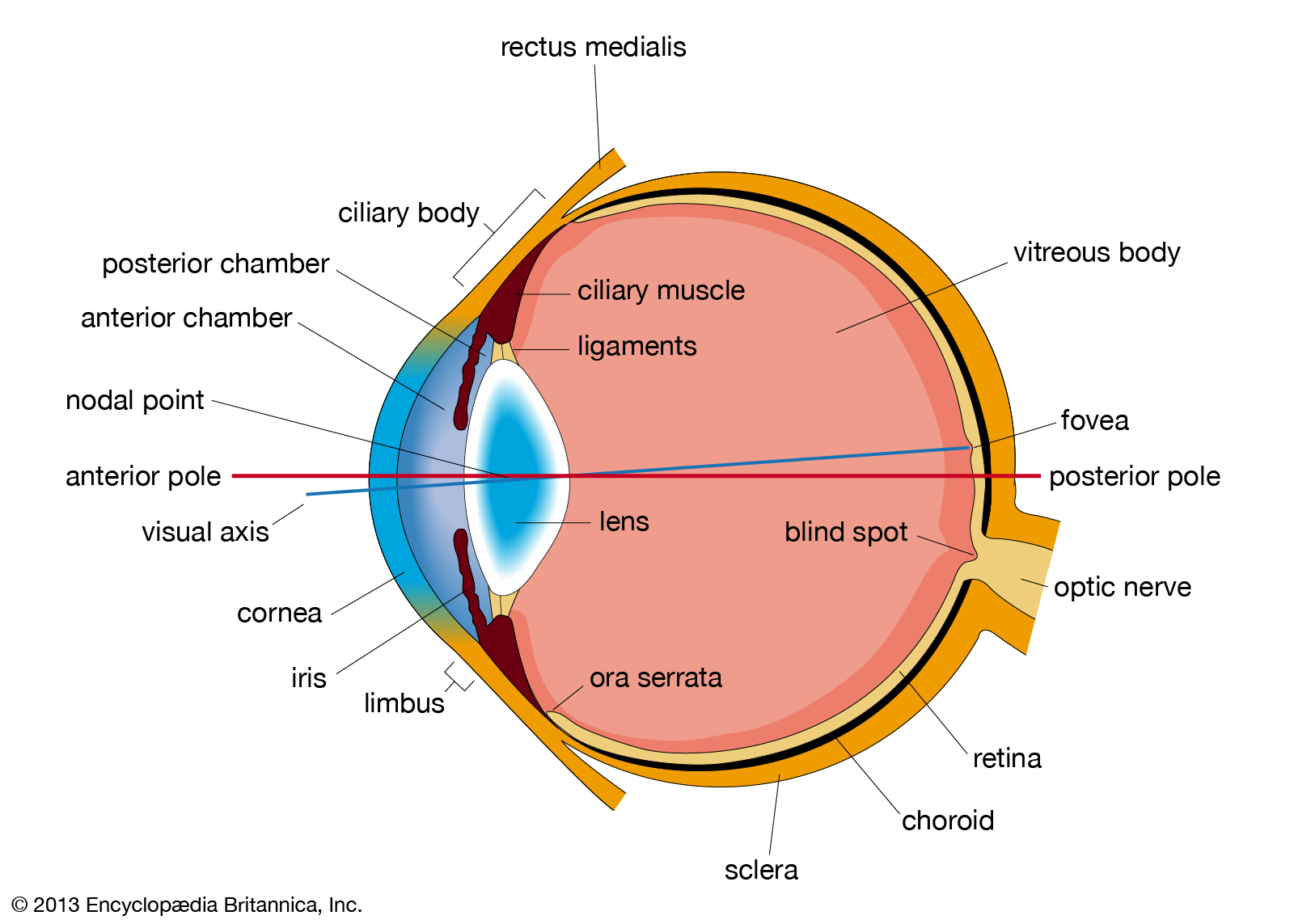 The eyes are the photoreceptor organs. They are located in the eye orbits formed by skull bones. It is about 2.5 cm in diameter and weighs 6 to 8 grams. It has three layers:

- It is the outer fibrous coat. It has three layers.

i)Sclera: It is the outer, tough, supportive, avascular, whitish and opaque layer. It is made up of white collagen fibres. It covers the 5/6th part of the eye. It protects the eye and maintains the shape of the eye.

ii)Cornea: It is a transparent, avascular layer that covers the anterior 1/6th portion of the eye. It is slightly bulged out. It receives oxygen from air and nutrition from the aqueous humour.

iii)Conjunctiva: It is a highly vascular, transparent and thin layer. It is made up of squamous epithelium. It is a circular membrane covering the anterior part of the eyeball.

At the junction of the sclera and cornea, there is an opening called the Canal of Schlemm. Aqueous humour produced in the anterior chamber is drained to the blood vessels through it.

It is the middle muscular and vascular layer.

-It is a thin, opaque and vascular layer. It is a deep chocolate colour due to the presence of melanin. It provides oxygen and nutrition to the retina. It also prevents scattering of light and blurring of vision due to scattering of light.

-It is a vascular and anteriorly thickened layer. It has inverted projections called ciliary processes and suspensory ligaments. It has ciliary glands that produce aqueous humour.

-It is an opaque, pigmented, circular diaphragm. It gives colour to the eyes. It has an opening called a pupil through which light enters the eye. The dilation of the pupil is controlled by two muscles. The inner radial muscles dilate the pupil and the outer circular muscles make the pupil smaller.

- It is the innermost layer. It is the most sensitive layer made up of nervous tissue and sensory cells. The sensory cells include rods and cones. The cones are conical or angular and are made up of iodopsin protein. They are 5-7 million in number in each eye. They work in bright light and high-intensity light. They are concentrated in the fovea centralis. The rods are columnar or straight and are made of rhodopsin protein. They are 122-125 million in each eye. They work during low intensity and dim light. They are absent in fovea centralis. The tunica nervosa has two spots. The blindspot or optic disc does not have rods and cones. So, no image is formed at it. It is located near the central axis. It is the spot through which nerves and blood vessels enter and exit the eye. The yellow spot or macula lutea or fovea centralis is located at the central axis. Sharp images are formed there due to the presence of cone cells.

The contents of the eye are as follows.

1)Lens: It is a highly elastic, transparent crystalline and biconvex structure. It is made of cuboidal epithelium. It is suspended by suspensory ligaments. It is located behind the iris. It has the power of accommodation which is the ability to change its focal length.

2)Aqueous humour: It is located in the aqueous chamber. It is the frontal and smallest chamber. The iris divides it into anterior and posterior regions. It is secreted by ciliary glands. It contains glucose, amino acids, acetic acid and respiratory gases. It is drained by the canal of Schlemm. It maintains intraocular pressure.

3)Vitreous humour: It is also known as Wharton's jelly. It is a jelly-like, gelatinous, transparent substance made up of water(99%),  salt, hyaluronic acid, mucopeptide, etc. It maintains hydrostatic pressure. It lies in the vitreous chamber. The vitreous chamber is the larger, posterior chamber located between lens and retina.

Working of the Eye

The cornea, aqueous humor, lens, and vitreous humor together form a diprotic apparatus that helps to focus the image of an object on the retina. When the light rays fall on the cornea, it passes through the pupil and forms image of a sharp object on the retina. Iris controls the amount of light that passes through the pupils. The lens adjusts for sharp focusing. This adjustment is made by the lens which is called accommodation. Eyes have the power of accommodation which helps to see objects situated at different distances. At rest, the lens remains flat with the help of suspensory ligaments. When the object is placed closer to the eyes, the cilliary muscles contract making the lens more convex. This reduces the focal length of the lens and the image is focused on the retina. The image formed on the retina is inverted. The light rays from the object pass through the layers of the retina to stimulate rods and cones. The inverted image formed is picked up by optic nerves as impulses and finally reached the brain where it is interpreted and the real sensation of light arises finally the person perceives the object as upright.