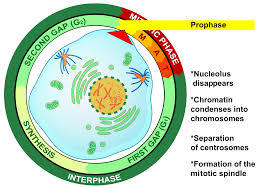 The most significant feature of cell meiosis is prophase I of the meiosis I division. It is a long process distinguish into five successive sub-phages.

1. In leptotene, the nucleus enlarges in size and it further increases. Nucleolus also increases.

2. The chromosome becomes distinct; appear as long fine threads by the condensation of chromatin materials.

3. Each chromosome appears to the longitudinal in shape but each DNA is already duplicated. So that it is formed of two chromatids. However the chromatids are tightly bounded together. So the leptotene chromosomes appear single.

2. The pairing of chromosomes is known as synapsis.

3. The pair chromosomes known as bivalent.

1. Pachytene starts when the pairing is complicated.

2. The chromosomes show shorting and thickening.

3. The two component of bivalent coiled around each other by the relational coiling, now, the homologues chromosome of all bivalent split longitudinally into the two sister chromatids. Thus the late Pachytene stage, the bivalent appear four stranded.

4. Each bivalent or chromosome pair is actually made up of four chromatid two of each chromosome.

5. Nucleolus till remain attach at the nuclear organizing region.

2. The homologous chromosome separated from one another but the still remain attach at the certain point along their length. The point is known as chaismata. The no. of chaismata determine the shape of the chromosomes, when there are two chaismata the chromosome O shaped and when they are many, they loop like.

3. The sister chromatid of bivalent are broken and rejoined crosswise. The phenomenon is known as crossing over.

SIGNIFICANCE OF CROSSING OVER:

1. The chaismata point is formed when the paternal and maternal chromatids are attached. So the exchange of nuclear material takes place.

2. It may lead to variation and transfer of hereditary information.

3. In the process of ex-change, the gene may be lost or gain due to mutation occurs in offspring.

2. A complete exchange of part between two chromatids of bivalent take place.

4. Spindle fiber appears around the bivalent.