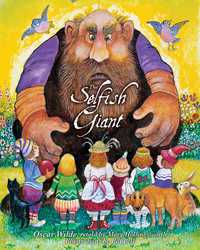 The children used to play in the selfish giant’s garden every afternoon after school. When the giant returned from his friend's house, he noticed children playing in his garden. When the children spotted the giant, they fled. The giant then built a high wall around it and placed a noticeboard warning TRESPASSERS WILL BE EXECUTED, and the children refused to return to the garden as a result.

Then came spring, and there were small blossoms and birds throughout the country. It was still winter just in the selfish giant's garden. There were no children, so the birds didn't care to sing, and the trees forgot to blossom. The grass was blanketed with snow, and the frost had turned all of the trees silver. They then invited the north wind to join them. He screamed about the garden all day. The hail was then invited. As a result, the hail began to fall. He rattled on the roof for three hours every day.

The giant was awakened one morning by the sound of beautiful music. He got out of bed and peered out the window, thinking it was king musicians passing by, but it was actually a bird singing in his garden. He noticed the children had crept in through a small hole in the wall and we're sitting in the tree branches. The giant’s garden was glad to have children back. Spring was everywhere except one corner in the garden.  The giant saw there was a small boy there.  He could not reach up to the branches of the tree and he was crying. The giant's heart melted and was sorry for what he had done. When the giant appeared in the garden, the children were terrified and fled.

The giant took the small boy gently in his hands and put him on the tree and the tree at once broke into blossom. The boy stretched his hands and flung them round the giant’s neck, and kissed him.  When the children saw that giant was not wicked any longer they came back to the garden with them came the spring as well. And then the giant announced it was their garden from now on to the children. He took an axe and knocked down all the walls.

All-day long the children and the giant played together. In the evening when the children came to bid goodbye to the giant, the giant asked the little boy's whereabouts to them. But the children were unfamiliar with the boy. They didn't know who the boy was and where he lived. Years passed, and the giant grew very old and feeble.

Then one morning he saw a marvelous sight he saw the little boy he loved. The giant ran down with great joy. Then the boy took the giant to his garden that is paradise. And next afternoon the children found the giant dead under the tree all covered with white blossom.