Refraction of Light on the basis of Wave Theory 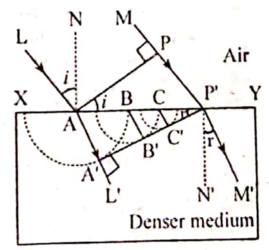 Refraction of Light on the basis of Wave Theory

Laws of refraction of light:

Verification of law (i) 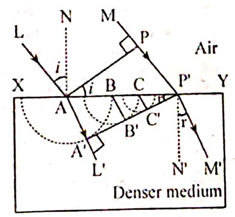 Let XY be a plane surface separating air form a denser medium and AP be a  plane wavefront just incident on it. The lines LA and MP which are perpendicular to the incident wavefront AP, represent incident rays. If AN is normal to the surface at A, then ∠LAN = i is the angle of incidence as shown in figure. Again the wavefront arrives at point A first of all and will arrive at points B, C.... later in time but in this order.

Therefore, different points on the surface XY will become source of secondary wavelets at different instants of time. When the disturbance from point P on incident wavefront has reached point P on the surface, the secondary wavelets from point A on  the surface will have acquired a radius say AA’ and those from points B, C, …. Equal to BB’, CC’, .. respectively. The refracted wavefront will be the tangent plane A’P’ touching all the secondary spherical wavelets. The lines A’L’ and P’M’ perpendicular to the refracted wavefront A’P’ are refracted rays. If P’N’ is normal to the surface, separation at point P’, the ∠N’P’M’ = r is the angle of refraction. 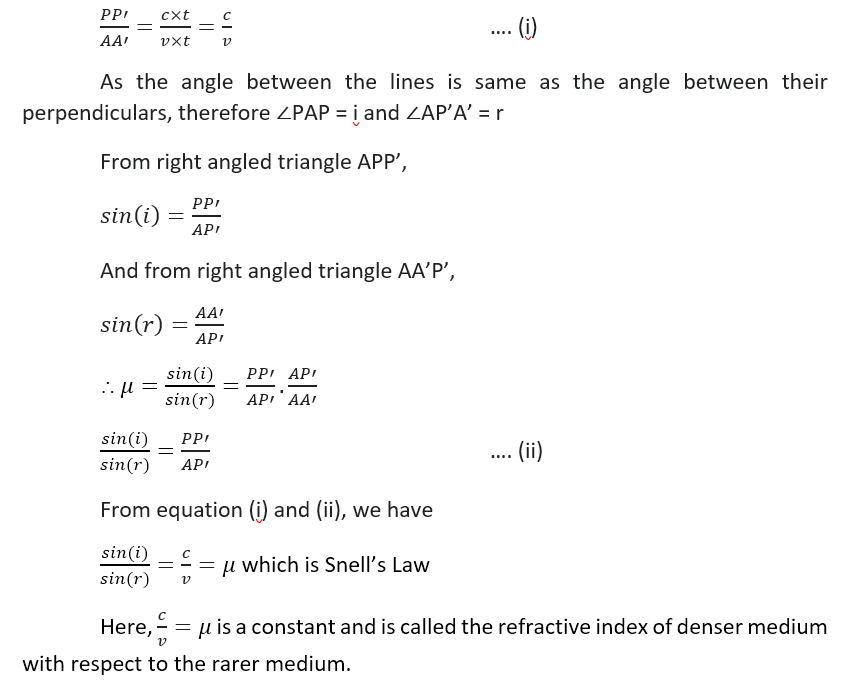 It can be proved that the incident ray (LA), the normal (AN) and the refracted ray (AA’L) all lie in the same plane. This proves another law of refraction.

Hence the laws of refraction are proved on the basis of wave theory.