↪ Isotopes are the atoms of same element which have same atomic number due to having same number of electron but differ with each other in their mass number due to difference in the number of neutrons.

↪ Due to having same number of electrons in their valence shell isotopes have similar chemical properties but they differ with each other in their physical properties due to difference in their atomic masses. 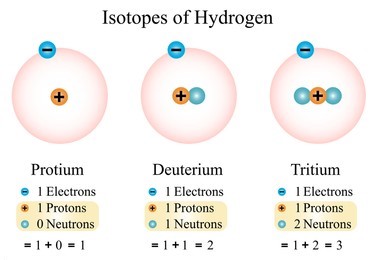 ↪ This is the most abundance isotope of hydrogen (99.98%). It has only one electron in its valence shell and one proton at its nucleus. It is most stable isotope if hydrogen.
↪ So its atomic number is 1 and mass number is also 1.

↪ Deuterium has one electron in its orbit with one proton and one neutron at its nucleus.
↪  So its atomic number is 1 but mass number is 2 i.e. electron = 1, proton = 1 neutron = 1