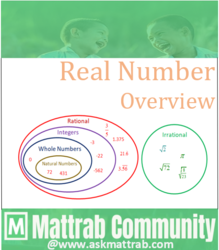 ﻿A Real Number is any positive or negative number which includes integers, rational and irrational numbers. In simple terms, all the numbers except complex number(numbers which have negative roots/numbers in the form "a + ib") can be called as Real Numbers.

﻿Irrational Numbers
﻿A number which can be expressed in the form of p/q where p and q are integers and q≠0 that are non-terminating and non-repeating decimals.
﻿Examples: π, e, √3, ∛13...etc.