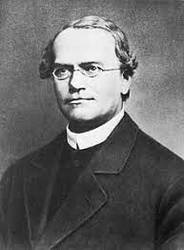 Gregor Johann Mendel (1822 - 1884) :- Mendel was born on July 22,1822 at Heinzendorf in Austria at Silesia village. Mendel worked in Augustinian Monastery as a monk at Brunn city, Austria. In 1856-57, he started his historical experiments of heredity on the pea(Pisum sativum) plant. His experimental work continued on pea plants till 1863 (19th century).

The results of his experiments were published in 1865. A paper by Mendel - by the name of "Experiment in plant Hybridization" - was published in this journal. Mendel didn't get any popularity. No one understood him. He died in 1884 without getting any credit for his work.

After 16 years of Mendel's death in 1900, Mendel's postulates were rediscovered by three scientists independently:

He republished Mendel's results in 1901 in Flora magazine.

The credit of the rediscovery of Mendelism goes to three scientists.

Mendel's experiments remain hidden for 34 years. Mendel published his work on the inheritance of characters in 1865 but for several reasons, it remained unrecognized till 1900.

Firstly, communication was not easy (as it is now) in those days and his work could not be widely publicized.

Secondly, his concept of genes (or factors, in Mendel's words) as stable and discrete units that controlled the expression of traits and, of the pair of alleles which did not with each other, wasn't accepted by his contemporaries as an explanation for the apparently continuous variation seen in nature.

Thirdly, Mendel's approach of using mathematics to explain biological phenomenon was totally new and unacceptable to many of the biologists of his time. Finally, though Mendel's work suggested that factors (genes) were discrete units, he could not provide any physical proof for the existence of factors or say what they were.