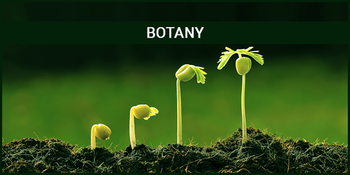 Gametogenesis leading to the formation of male gametes in angiosperms occurs in two stages:

The androecium of the plant is made up of the stamen, filament, and anthers. The pollen grains that carry the male gametes are contained in the anthers. The anther is anatomically divided into lobes and the lobes are further divided into chambers called microsporangia.

The archesporial cells divide in a plane parallel to the outer wall of the anther lobe(periclinal division), cutting off parallel cells towards the epidermis and primary sporogenous cells towards the interior of the anther. The cells of the parietal layer undergo series of periclinal (Being parallel) and anticlinal(being perpendicular) division to form 2-5 concentric layers of the anther wall. In this way;This archesporial cell divides into outer and inner layers. The inner layer forms the sporogenous tissue or cell that forms the pollen mother cell.

The transverse section of a mature anther shows the following:

Wall of the anther: The anther wall consists of four layers. These are epidermis, endothecium, middle layers and tapetum.

Epidermis: This is the outermost layer. It is only one cell in thickness.

Endothecium: This layer is situated just below the epidermis. It is a single layer of radially elongated cell with fibrous thickening. Because of the presence of fibrous thickenings, the endothecium is also called fibrous layer. In between these cells, a few cells without thickening are also present. These thinned wall cells collectively form the stomium or line of dehiscence.

Middle layers: The middle layers consist of three to four layers of thinned wall cells. These layers are situated below the endothecium. These layers generally degenerate to provide nourishment to the growing microspore mother cells.

Tapetum: Tapetum is the innermost layer of the wall and is multinucleate. The tapetal cells provide nutrition to the developing microspores. Tapetum secretes both enzymes and hormones. Tapetum is of two types-Secretory or glandular tapetum and amoeboid or plasmodial tapetum. Pollen chamber: The pollen chamber forms the central cavity of anther lobe. The process of microsporogenesis takes place in the pollen chamber.

The pollen grain is the haploid cell that is made up of two layers: the outer exine layer which is derived from the tapetum and the inner layer called intine. The exine is present all over the pollen grain except in one small part from where the pollen tube emerges post pollination. This small part is known as the germ pore. 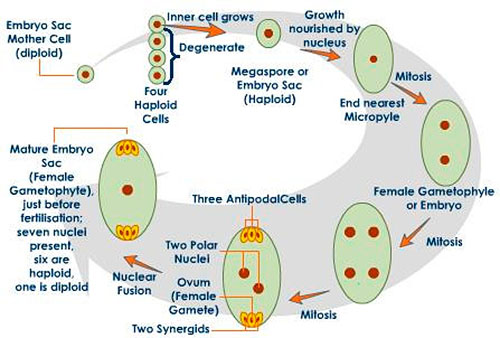 The word ‘mega-‘ is used instead of ‘micro-‘ in females because the female gametes are said to be larger in size as compared to the male gametes.

This megaspore nucleus now begins to divide mitotically to form 8 nuclei. 6 of the 8 nuclei migrate to opposing poles (3 each) while two nuclei remain at the center. The nuclei that remain at the center are known as polar nuclei. These polar nuclei fuse to form the secondary nucleus. The megaspore matures into an embryo sac. This entire process is called as megagametogenesis.