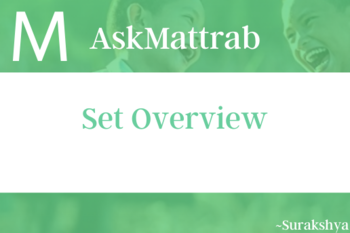 •A well defined collection of distinct objects is called Set.

•The Sets are generally denoted by the Capital letters A,B,C,…..X,Y,Z.

•ℝ= The set of real numbers ={x: x is either rational or irrational}

In this method, a set is represented by listing all its elements in curly brackets and separating them by commas.

In this method, a set is represented by stating all the properties which are satisfied by the elements of the set and not by any other elemets out of the set.

•A set is said to be an infinite set if its ielements are uncountable or its elements are infinite or its cardinality is  not fixed.

Other examples: The set of whole numbers, the set of integers etc.

■Equal Sets:    Two sets A  and B are said to be equal sets if they have same elements.

The union of two sets A and B is defined as the set of all those elements which are in A or B or both. It is denoted by A⋃B.

Let A and B are two sets then the difference of sets A and B is denoted by A-B and defined by :A-B={x:x∈A and x∉B}

Complement of a set

Let A be the subset of universal set U then, complement of the set A is denoted as