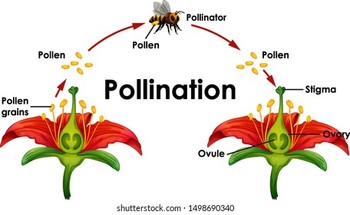 Pollination is defined as the process of transfer of pollen grains from the anther of a flower of a plant to the stigma of the same flower or of different flower of same plant or genetically similar or different plants. 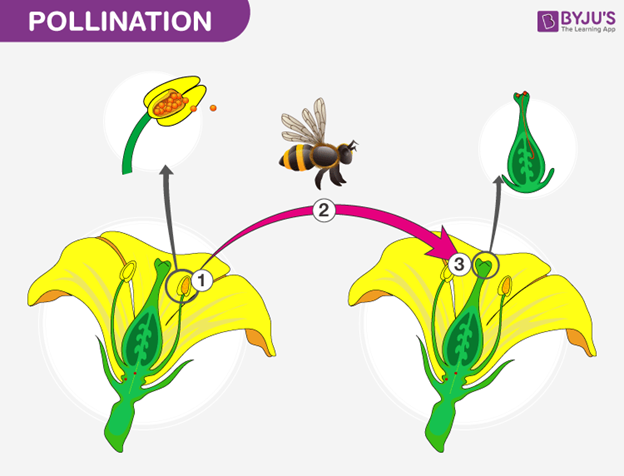 Self-pollination is the transference of pollen grains from the anther of a flower to the stigma of either the same or genetically similar flower. It is basically independent to the external agency. Self-pollination can be observed in legumes such as orchids, sunflowers, peas, peanuts, oats, peaches, potatoes, wheat, and others. It’s of two types:

It is a type of self-pollination where the transfer of pollen grains from the anther to the stigma takes place within the same flower. Opening and exposure of anther and stigma are necessary for autogamy. There are two conditions for autogamy to takes place:

Geitonogamy is the type of self-pollinations where the transfer of pollen grains from the anther to the stigma takes place between different flowers in the same plant. Though it seems like cross-pollination and takes place with the help of pollinator, both the gametes have the same plant as their origin. 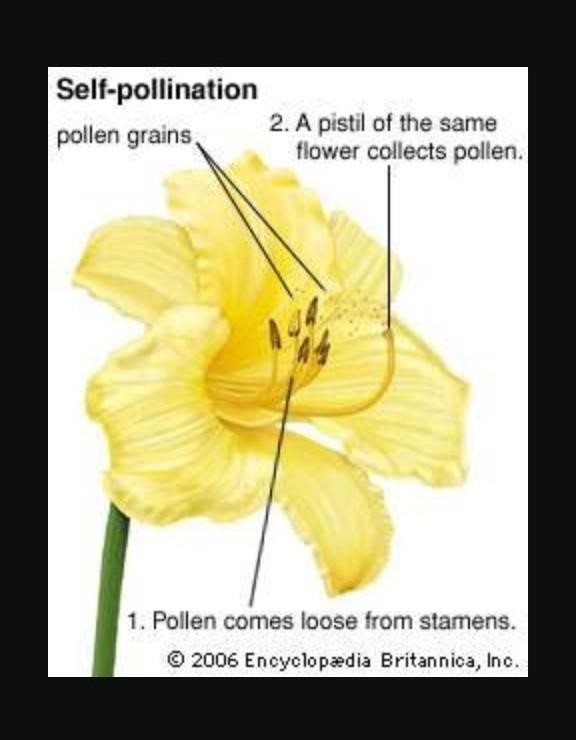 1.    Homogamy:  Anthers and stigma of the bisexual flowers of some plants mature at the same time. They are brought close to each other by growth, bending or folding to ensure self-pollination. This condition is called homogamy. e.g., Mirabilis (Four O, clock), Catharanthus (= Vinca), Potato, Sunflower, Wheat, Rice, etc.

Some of the advantages and disadvantages of self-pollination are given below: 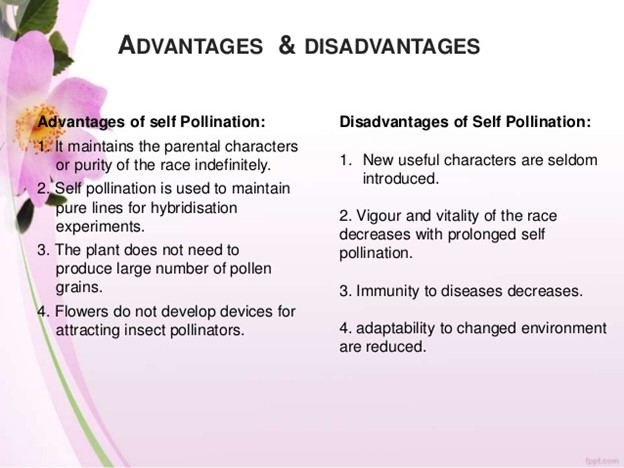 ·         Flowers are produced above the foliage, before the appearance of new foliage or placed in hanging position.

The pollination is carried out with the help of water and is known as hydrophilous type of cross pollination.

It is generally seen in aquatic plants where pollens are produced in large numbers and with specific weight which makes them float below the surface.

In Vallisneria, the male flower floats on the surface of the water till it comes in contact with the female flowers.

Hydrophily is of two types :

·         Perianth and other floral parts are unwettable.

·         Pollen grains are light and unwettable due to presence of mucilage cover.

This type of pollination takes place by different types of animals. It is of different kinds:

(a) Entomophily: When pollination is brought about by the agency of insects, it is known as entomophily or insect pollination. About 80% pollination occurs by insects like moths, beetles, butterflies, wasp, etc. All the flowers pollinated by insects are brightly coloured, have a sweet smell and produce nectar. Entomophilous flowers produce a small amount of pollen which has a spinous and sticky exine due to presence of pollen kitt. The stigmas of such flowers are long rough and sticky. Salvia is excellent example of insect pollination is which pollination occurs by lever or turn pipe mechanism. Other examples of insect plants are Yucca (by Tageticula moth), Orchid Ophrys speculum (by Colpa aurea a hairy wasp), Ficus (by Blastophega), etc. Yucca is pollinated by Pronuba (= Tegaticula) yuccasella which passes its larval stage inside the ripening ovary. The flower of orchid ophrys resemble in shape colour and odour to female wasp of colpa aurea (mimicry). The male wasps pollinate the flowers mistaking them as female (pseudocopulation).

(b) Ornithophily : When flowers are pollinated by birds, the phenomenon is known as ornithophily. The most common bird pollinators are Sun bird, Humming bird, Crow, Bulbul, Parrot, Mynah, etc. The birds visit a large variety of flowers such as Bombax (red silk cotton), Erythrina (Coral tree), Callistemon (Bottle brush), Bignonia, Agave, etc. Flowers are brightly coloured and produce plenty of nectar and large quantities of pollen. Humming bird pollinates while hovering over the flowers and sucking nectar. The bird can derive about half of its body weight of nectar in a single day. The nectar is chiefly made of sugars and provides a sweet drink to the bird.

The main contrivances ensuring cross pollination are as follows:

(i) Diclincy or Unisexuality : In unisexual flowers stamens and carpels are found in different flowers. Unisexuality can be of two types :

(ii) Dichogamy : In bisexual flowers, when two sexes mature at different intervals and thus avoid self pollination is known as dichogamy. When stamens mature earlier than the stigma, it is known as protandry and the flowers are called protandrous e.g., Coriander, Jasmine, Sunflower, Lady’s finger, etc. When stigma matures earlier than the stamens, it is known as protogyny and the flowers are called protogynous. e.g., Rose, Tobacco, Crucifers, etc.

(iii) Heterostyly : The plants of some species in which flowers are dimorphic. Thus facilitate cross pollination. Some of them possess a long style but short stamens and are known as pin-eyed while others have short style and long stamens. These are known as thrum-eyed. e.g., Oxalis.

(iv) Herkogamy : In some bisexual flowers where the stigma and anthers mature at the same time, self pollination is avoided by some sort of barrier. The flowers show following contrivances :

Some of the advantages and disadvantages of cross pollination are given below : 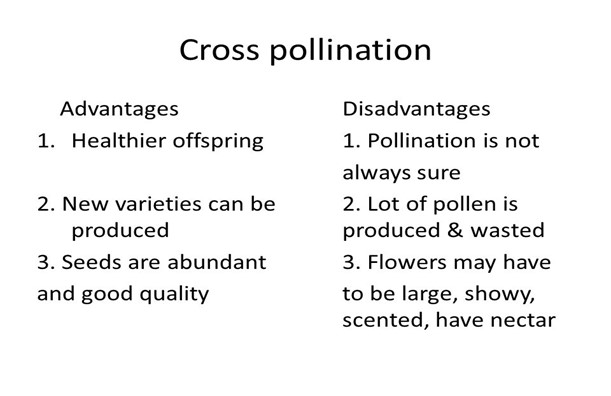 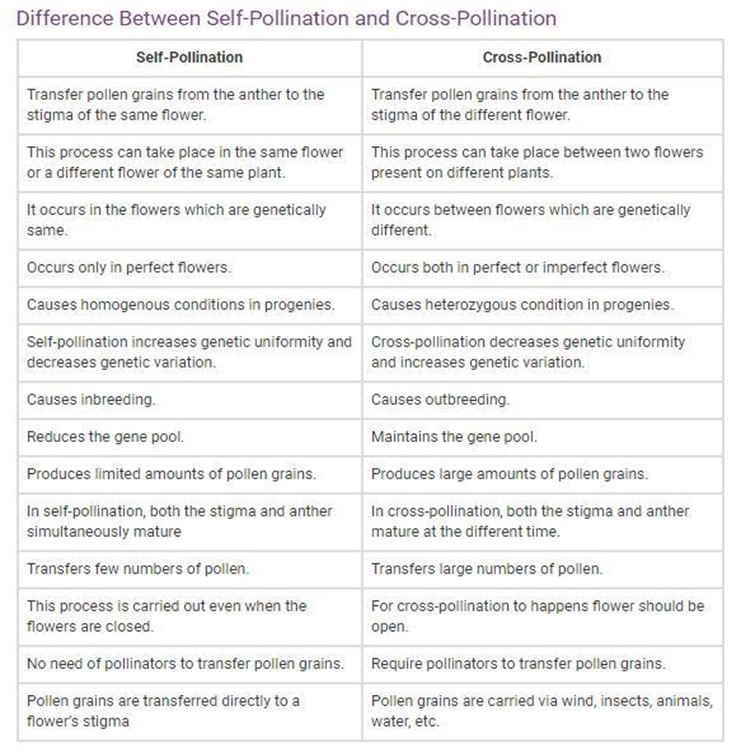 The fusion of two dissimilar sexual reproductive units (gametes) is called fertilization. This process was discovered by Strasburger (1884).

(2) Entry of pollen tube into ovule : After reaching ovary, the pollen tube enters the ovule. Pollen tube may enter the ovule by any one of the following routes :

(i) Porogamy : When the pollen tube enters the ovule through micropyle, it is called porogamy. It is the most common type. e.g., Lily.

(ii) Chalazogamy : The entry of pollen tube into the ovule from chalazal region is known as chalazogamy. Chalazogamy is less common. e.g., Casuarina, Juglans, Betula, etc. It was first observed by Treub (1981) in Casuarina.

(iii) Mesogamy : The pollen tube enters the ovule through its middle part i.e., through integument (e.g., Cucurbita, Populus) or through funicle (e.g., Pistacia). 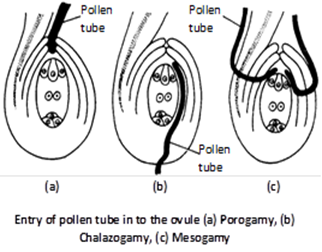 (4) Double fertilization : The nuclei of both the male gametes are released in the embryo sac. One male gamete fuses with the egg to form the diploid zygote. The process is called syngamy or generative fertilization. This syngamy was discovered by Strasburger (1884).

The zygote divides transversely to form a two-celled proembryo. The cell towards the micropyle is known as the basal cell and the other is known as terminal cell.

The zygote divides transversely to form a two-celled proembryo. The cell towards the micropyle is known as the basal cell and the other is known as terminal cell.

The basal cell undergoes several transverse divisions to form a long suspensor. The terminal cell divides longitudinally twice to form four cells. This four-celled stage of terminal cell is called quadrant stage. The four cells of the quadrant stage now divide transversely to form an octant stage of eight cells arranged in two tiers of four cells. The lower tier gives rise to the stem tip and cotyledons, while the upper tier is meant for the formation of hypocotyl.

This is followed by periclinal divisioin the octant cells to give rise to eight outer cells, and eight inner cells. The eight outer cells form the dermatogen, which divide anticlinally and develop into the epidermis. The inner cells form the periblem and plerome. The cortex develops from the periblem and stele from the plerome. The basal cell divides several times to form a long suspensor of six to ten cells. The lowermost cell of the suspensor nearest to the developing embryo is known as hypophysis. The hypophysis, by repeated divisions, gives rise to root cap, epidermis and cortex of the root.

Further enlargement of hypocotyl and cotyledon result in a curvature of the cotyledons. The embryo at this stage appear as a horse-shoe shaped structure. In the mature embryo, the stem tip is terminal and the two cotyledons occupy the lateral position. 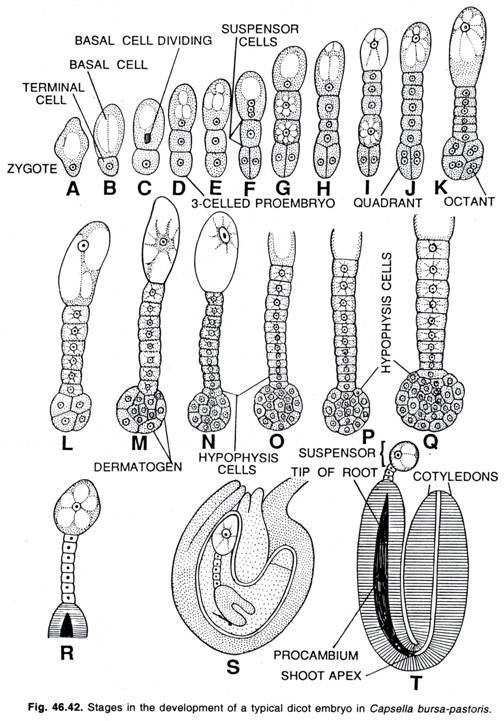 Development of Embryo in Monocots:

There is no essential difference between the monocotyledons and the dicotyledons regarding the early cell divisions of the proembryo, but the mature embryos are quite different in two groups. Here the embryogeny of Sagittaria sagittifolia has been given as one of the examples.

In the next stage, the two cells once again divide vertically forming quadrants. The cell next to the quadrants also divides vertically and the cell next to the upper vesicular divides several times transversely. The quadrants now divide transversely forming the octants, the eight cells being arranged in two tiers of four cells each. With the result of periclinal division, the dermatogen is formed.

Later the periblem and plerome are also differentiated. All these regions, formed from the octants develop into a single terminal cotyledon afterwards. The lowermost cell L of the three-celled suspensor divides vertically to form the plumule or stem tip. The cells R form radicle. The upper 3-6 cells contribute to the formation of suspensor. 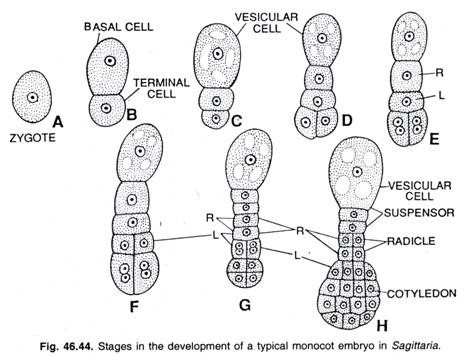