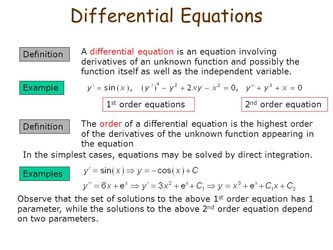 In Mathematics, a differential equation is an equation that contains one or more functions with its derivatives. The derivatives of the function define the rate of change of a function at a point. It is mainly used in fields such as physics, engineering, biology and so on. The primary purpose of the differential equation is the study of solutions that satisfy the equations and the properties of the solutions.