Linkage And Crossing Over 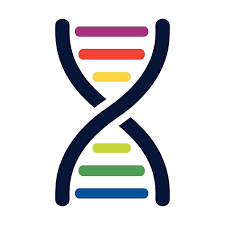 Linkage  is  the tendency of certain genes located in same chromosome that gets inherited without any change in sequence.

They disobey Mendel’s law of independent assortment as linked genes   while forming genome won’t segregate as independently as stated in the law.

2. They are found in linear fashion.

3. The strength of linkage is determined by distance between the linked genes ,more close the genes  more will be chances of linkage.

4. They remain in their original combination during course of inheritance.

Given by :  Punnet and Bateson

When dominant genes are linked they always try to couple and when its not they repel one another. 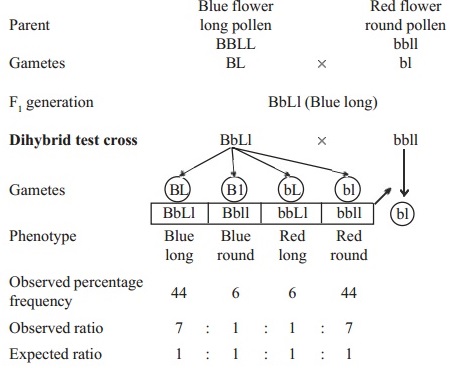 Here blue and long pollened then red round pollened became at greater statistics due to coupling . 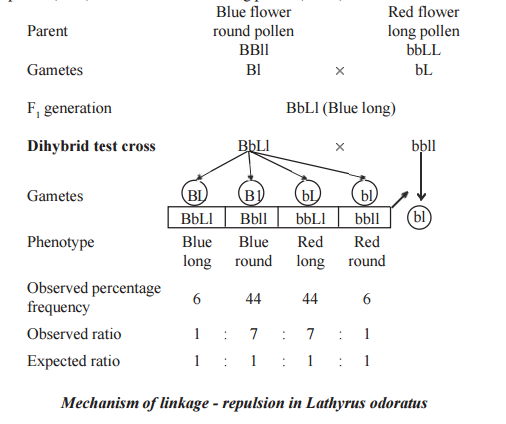 Here, opposite is observed because dominant blue and long pollen gene is repelling one another.

The linkage where 100 % parental characters are restored in progeny generation. 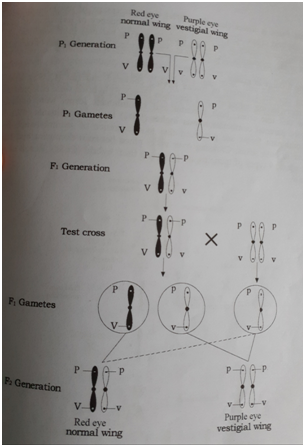 Inference :  genes  for colour and shape  of seed were not completely linked due to certain distance apartness having certain chances of crossing over for recombinant genotype.

2.   Due to incomplete linkage prediction of ancestors is possible.

Crossing over is the process of exchange in genetic material  between non sister chromatids of homologous chromosome during prophase –I of meiotic cell division.

Here, homologous chromosome gets paired up. This occurs in zygotene sub stage of  prophase in meiosis . the pair is termed as bivalents.

The Ribo nucleoprotein between sister chromatids dissolve and 4 strands get clearly seen in pachytene sub phase.

3.Crossing over and chaismata formation.

In Pachytene only crossing over occur , where certain strand of non sister chromatids get exchanged  by splicing via Endo nuclease then, fixed by DNA ligase enzyme. The Ribo  protein in between non sister now dissolves except in zone of exchange called chiasmata. This happens in diplotene sub phase.

Types of crossing over :

1.   Single : only one region of crossing over. Most common type.

2.   Double : two chiasmata forms between same non-sister chromatids or the other one of same homologous chromosome. It can be in two strand or 3 strand or all strand.

3.   Multiple : more than two point of crossing over . most rare type. 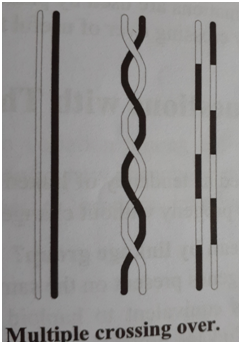 1.   Sex : like for male Drosophila  female silkworm  no crossing over occur in them

4.   Distance between the genes:  greater is the distance for crossing over more are the chances of it.

6.   Chemicals : like Colchicine  in fact  prevents pairing  for crossing over.

3.They  are proof for linear arrangement of gene in chromosome.