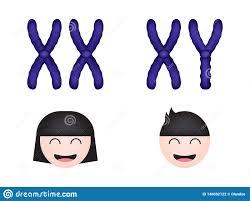 Following are the properties of this type of inheritance :

1.   These  type of gene are mostly present in X- chromosome.

2.   So Y- chromosome has no such role in this type of generation so,  called holandric gene.

3.    Genes responsible for this type of heritance are usually recessive in nature.

4.   So ,   female( XX),  when have only one out  of 2  chromosome of defect or linked character,  phenotypically they don’t have defect but acts as carrier.

5.     Whereas ,male (XY) doesn’t get chance to be carrier as with one defective X- chromosome only  phenotypic expression is possible unlike in females, as X and Y are non –homologous  so Y is incapable to mask  expression of X.

6.   They also show Criss-cross inheritance which means  the sex linked characters in one sex , gets transferred to own sex progeny through opposite sex .  For instance character inheritance in grand pa to his grandson only via his daughter.

Some examples of Criss cross inheritance :

This example was experimentally done by T.H Morgan. 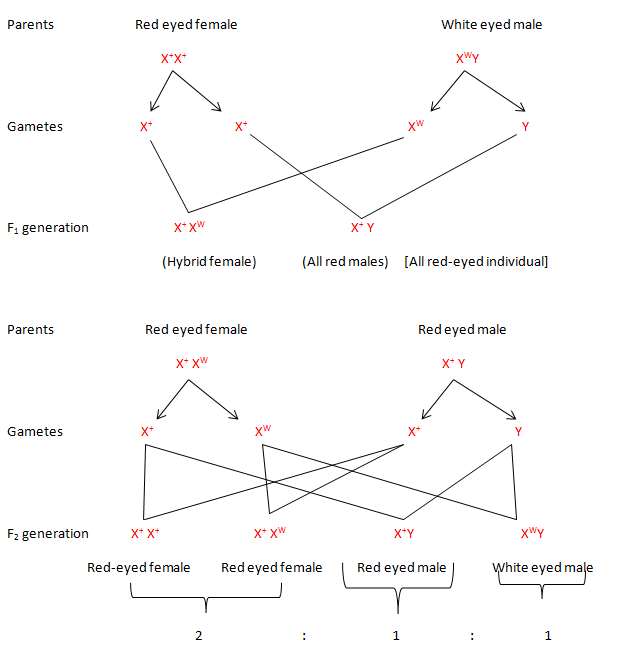 This clearly infers that sex linked trait i.e   white eyed  gene is inherit from grandfather Drosophila   to  his daughter  Drosophila  as carrier genotype of white eye

In f2 generation  we get

So, the inference from cross is clear that the gene expressed in 25% of white eyed male in F2 generation had come all way from grand pa through his daughter as carrier not from his  son as  they are all normal red eyed due to  their mother’s  normal genes. 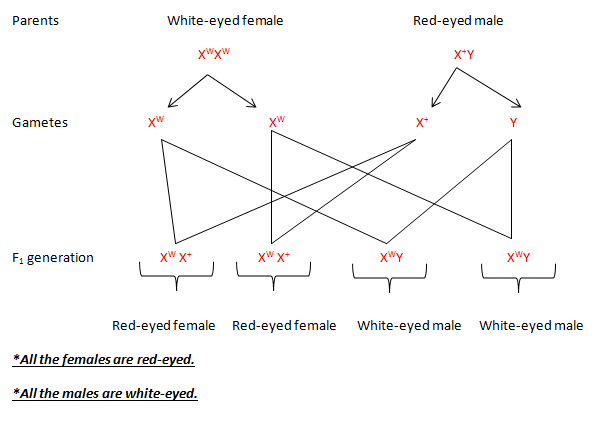 The grand mother’s gene of white eyed is inherited to  her son only  while daughter become only carrier . 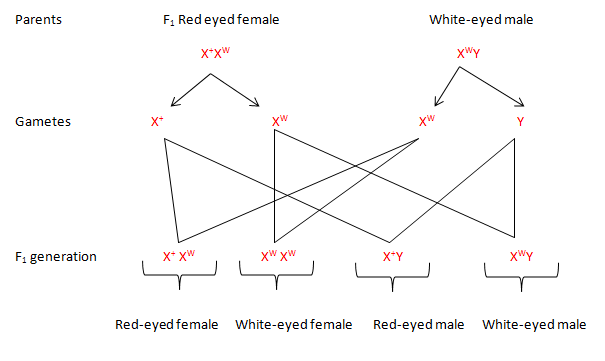 In f2 generation , we get

So,  here also, gene linked with grandma’s has been inherit to her granddaughter  only through  her infected sons.

Here is the cross between colour blind male and normal female 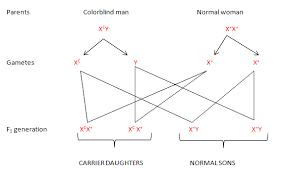 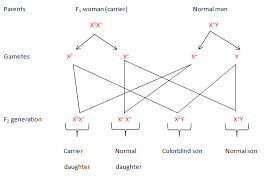 From the cross above, like in our first example  we can infer the reason for grandson  in F2 generation to be colour blind   is the gene of his grandfather inherit through   grandson’s mother   only. 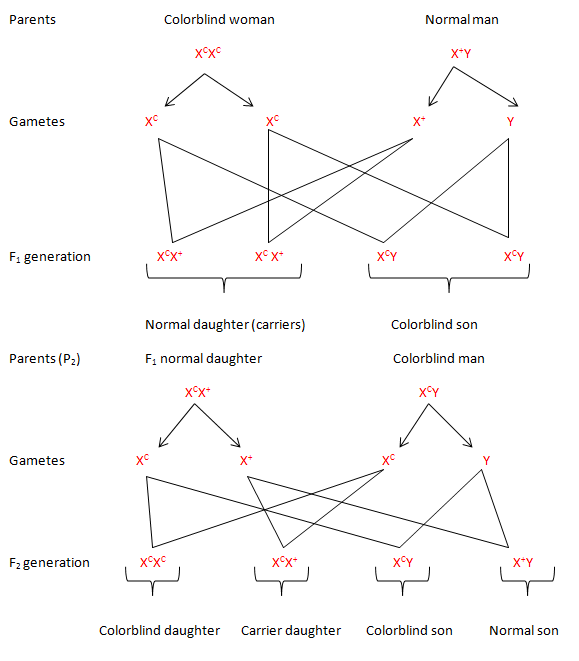 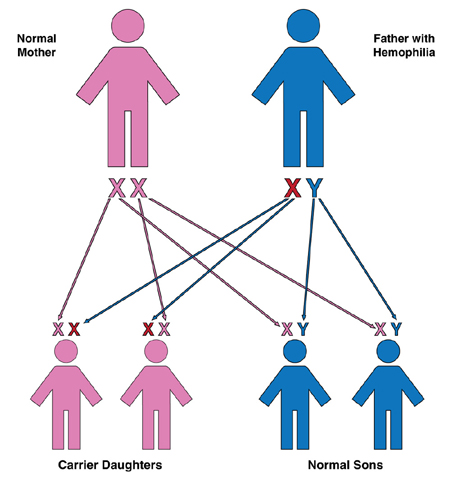 then, the carrier daughters are crossed with normal males. 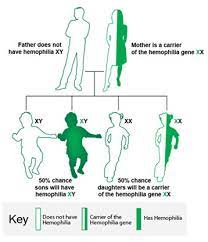 We got only females as carrier of disease while male children  are found completely Ok. Had the hemophilia causing gene would be linked to  Y chromosome, male child won’t be safe from hemophilia.

Then, progeny i.e. infected female  is crossed with normal male :.

So, here we get 25 % of total progeny as male get hemophilia all due to carrier female gene  that came all  along from    hemophilic grandpa.

The female hemophilic ones  doesn’t get born because these gene turns out to be fatal and cause natural abortion.

History of this disease ( JUST FOR EXTRA NOT IN CURRICULUM)

Hemophilia has been called a "royal disease".  This is because the hemophilia gene was passed from Queen Victoria, who became Queen of England in 1837, to the ruling families of Russia, Spain, and Germany.  Queen Victoria's gene for hemophilia was caused by spontaneous mutation.  Of her children, one son, Leopold, had hemophilia, and two daughters, Alice and Beatrice, were carriers.  Beatrice's daughter married into the Spanish royal family.  She passed the gene to the male heir to the Spanish throne.

Queen Victoria's other daughter, Alice, had a carrier daughter, Alix.  Alix became Empress Alexandra at her marriage to Russia's Czar Nicholas in 1894.  Their son, born in 1904 and named Alexis, inherited hemophilia from his mother.  The young man Alexis was treated for bleeds by the mysterious Rasputin, known as a holy man with the power to heal.  The fascinating story of this royal family is told in the book Nicholas and Alexandra by Robert Massie (the father of a son with hemophilia).

twelve biology Linkage and Crossing Over