When two terminals of a battery are connected by a conductor, an electric current flows through the conductor. One terminal continuously sends electrons into the conductor, while the other continuously receives electrons from it. In this way, the battery behaves like an electric pump. The property of a cell (or generator) that makes the charge move in a particular direction is called electromotive force or emf. Just like a force that moves a mass, an emf moves a charge in a circuit. The emf of a source is not a force but work done in moving a unit charge around the circuit

The emf of a cell is the energy supplied by the cell to move unit charge around a circuit join to it. It the potential difference between the terminals of the cell in an open circuit. It does not depend on the size of a cell but it depends on the chemical used in it. It is denoted by E. Its unit is volt in SI-unit

Fig  It is denoted by r 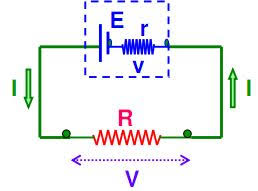 The internal resistance of a cell depends on many factors

Nature of the electrodes

The temperature of the electrolyte, internal resistance decreases with the rising of temperature.