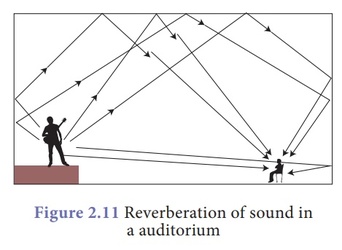 It is the persistence or prolongation of sound in an enclosure (room or hall) as a result of multiple reflections from the walls, ceiling, and other materials even after the original source has ceased to emit the sound.

When sound waves are produced in a hall, they spread out and strike the surfaces of the hall. Then the sound waves are partly absorbed and partly reflected depending upon the character of the surface. A smooth hard surface reflects most of the sound incident on it. A rough or porous surface absorbs most of the sound incident on it. Since the surface absorbs a part of sound energy in each reflection, the sound becomes weaker and weaker and finally becomes too weak to be heard.

The branch of physics which deals with the production of the best sound effects in rooms, halls, etc is called acoustics of buildings.

The following acoustical conditions have to be secured in a large room or hall.