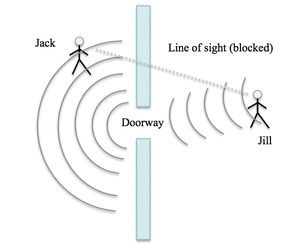 All waves are reflected, refracted, diffracted and show the phenomenon of interference like light waves.

Reflection of Sound: Like light waves, sound waves are reflected from a plane surface obeying the law of reflection, i.e. making an angle of incidence equal to the angle of reflection.
That is, ∠i = ∠r

In our daily life, we can hear the sound reflected from surfaces like walls, mountains, ground, clouds, etc. In big halls, it is easy to hear a reflected sound. The multiple reflections of the sound of lightning produce the rolling sound of thunder.

Refraction of Sound: Sound wave is refracted like lightwave when traveling through a non-uniform medium. This is due to the fact that the speed of sound is different in different mediums.

Due to the refraction of sound, we can hear sounds easily at night than during clear days. On a clear day, the lower layer of the atmosphere is hotter than the layers above. Since sound travels faster in a hotter medium, its speed is greater near the surface. As a result, the waves are bent away from the surface. Thus, the intensity of the sound waves diminishes and does not seem to travel a long distance. On a clear night, the lower layer of the atmosphere is colder than the air above. Now, the sound waves travel faster at the higher layers than at the lower layers. Thus, the waves are bent towards the earth's surface. The intensity of the sound increases and seems to travel a greater distance.

Interference of Sound: The interference phenomenon can be observed when two or more waves of the same frequency overlap. This is according to the principle of superposition. If crest and crest or trough and trough arrive at a point from two sources, the resultant wave has a large amplitude. It is called constructive interference. If crest and trough from two sources reach a point, they will cancel each other and the resultant amplitude will decrease. This is called destructive interference.