Principle of Superposition of Waves 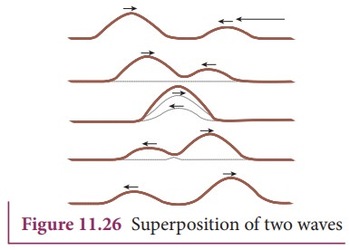 Principle of Superposition of Waves

At any point of the medium, the combined effect is given by the principle of superposition.

This principle states that if at any point two waves of the same kind reach simultaneously, the resultant displacement at that point is the sum of the displacements due to the individual waves.

Then the resultant displacement, y, at that point will be

For example, we can tune our radio for a particular station even though different frequencies from different stations pass through the radio antenna. Using the superposition principle, it becomes possible to analyze a complex wave motion as the combination of simple waves.

The superposition principle holds true for all wave motions for which the equations governing them are linear.