Wave Motion and types of Waves 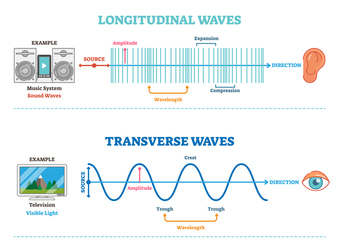 A wave is the transfer of energy and momentum, in form of disturbance, from one part of a medium to another without the actual transfer of particles of the medium from one point to another.

For example, water waves spread along the surface from one point to another, every object floating on the water will be disturbed by the wave but it does not travel along with the wave.

This shows that no water particles are actually transferred to carry the wave.
Similarly, sound waves carry energy from the source to the observer by disturbance of air.

Let. f = the frequency of oscillation of a source, 2. = the wavelength of the wave.

For one complete vibration of the source, the disturbance moves forward (ie, away from the source) a distance λ. Therefore, the total distance traveled by the wave in one second (i.e. after f vibrations of the source) is fλ.

V, the velocity of the wave which can be defined as the distance the wave profile or waveform moves in one second, is given by.

This equation is the equation of wave motion for all kinds of waves including mechanical waves, sound waves, and electromagnetic waves.

Waves are classified into two groups according to motions of matter particles of a medium with respect to the direction of propagation of waves.

Waves on the surface of the water are neither purely longitudinal nor purely transverse. As the wave passes, the particles of water move both back and forth, and up and down.