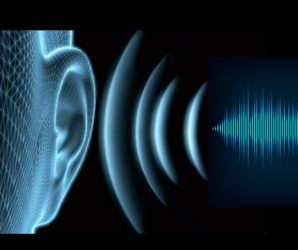 The waves having frequency less than 20 Hz and greater than 20,000 Hz cannot be heard by human ear. They are classified as infrasound and ultrasound respectively.

Infrasound, sometimes referred to as low-frequency sound, describes sound waves with a frequency below the lower limit of audibility (generally 20 Hz).  The study of such sound waves is sometimes referred to as infrasonic, covering sounds beneath 20 Hz down to 0.1 Hz. and rarely to 0.001 Hz. Infrasound is produced by large vibrating bodies. These waves are not edible to human ear. For example, infrasonic waves are produced by the vibration of the earth's surface during earthquake. People use this frequency range for monitoring earthquakes, charting rock and petroleum formations below the earth. Some animals like elephants, rhinoceros and whales etc also produce infrasound.

The waves of frequency greater than 20,000 Hz are known as ultrasonic waves or ultrasound. These waves are not audible to a human ear but they can be heard by animals and birds.

Bats use a variety of ultrasonic ranging (echolocation) techniques to detect their prey. They can detect frequencies beyond 100 kHz, possibly up to 200 kHz.

Many insects have good ultrasonic hearing, and most of these 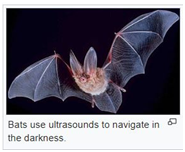 are nocturnal insects listening for echolocating bats. These include many groups of moths, beetles, praying mantids and lacewings. Upon hearing a bat, some insects will make evasive

manoeuvres to escape being caught. Ultrasonic frequencies trigger a reflex action in the noctuid moth that causes it to drop slightly in its flight to evade attack. Tiger moths also emit clicks which may disturb bats' echolocation, and in other cases may advertise the fact that they are poisonous by emitting sound.

Dogs and cats' hearing range extends into the ultrasound; the top end of a dog's hearing range is about 45 kHz, while a cat's is 64 kHz. The wild ancestors of cats and dogs evolved this higher hearing range to hear high-frequency sounds made by their preferred prey, small rodents. A dog whistle is a whistle that emits ultrasound, used for training and calling dogs. The frequency of most dog whistles is within the range of 23 to 54 kHz.

Toothed whales, including dolphins, can hear ultrasound and use such sounds in their navigational system (biosonar) to orient and to capture prey. 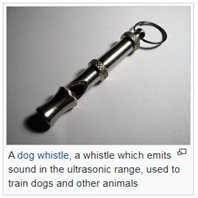 ·       They are used for cleaning the hidden parts of an instrument.

·       They are used for diagnosing the diseases in human body. Medical sonography (ultrasonography) is an ultrasound-based diagnostic medical imaging technique used to visualize muscles, tendons, and many internal organs to capture their size, structure and any pathological lesions with real time tomographic images. Ultrasound has been used by radiologists and sonographers to image the human body for at least 50 years and has become a widely used diagnostic tool. The technology is relatively inexpensive and portable, especially when compared with other techniques.

·       Ultrasonic waves are used to analyze the development of unborn child. 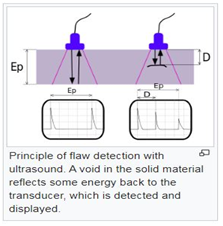 Threshold of Hearing and Pain

The normal human ear tolerable to maximum intensity is 1 Wm-2. This is called threshold of pain.

A desirable sound that produces pleasing effect on the listeners is called musical sound. Such sound is produced by regular and periodic vibrations. Sounds produced by tuning fork, flute, piano, etc are musical sounds. Musical sounds are regular, periodic and continuous and there is no sudden change in loudness.

The sound that produces an unpleasant effect on the listener is called noise. It is an unpleasant, discontinuous and non-uniform sound produced by irregular succession of disturbances and there is sudden change of loudness.

Differences between Musical Sound and Noise

There are three fundamental characteristics of musical sounds. They are pitch, loudness (intensity) and quality (timber).

It is a sensation experienced by a listener. It is a subjective quantity depending upon the listener. The pitch of sound depends upon the frequency of vibration in air. If the frequency is high then the pitch is high and if the frequency is low then the pitch is low.. The high pitch sound is shrill and the low pitch sound is grave or flat. The voice produced by ladies, children and mosquito has high pitch and the voice of an old man is hoarse or flat because of low pitch.

It is a measure of complexity of sound which enables us to distinguish between two sounds of the same pitch and loudness produced by two different sources. It is also a subjective in character that depends on the number of overtones order and the relative intensities. We can distinguish sounds from two different instruments even though they have the same tone and loudness due to the different quality of sound produced by two instruments. The quality of a sound is determined by the number and intensities of the overtones. 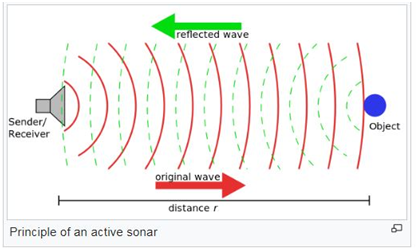 SONAR (originally an acronym for sound navigation ranging) is a technique that uses sound propagation (usually underwater, as in submarine navigation) to navigate, communicate with or detect objects on or under the surface of the water, such as other vessels. Doppler's principle is used in SONAR for the detection of sub-marines or group of fishes under water in sea. The SONAR makes use of ultrasound of frequencies more than 20 kHz and the reflected signals can be used for calculation of the speed approaching or receding of sub- marines underwater.

The unwanted sound which produces unpleasant effect in our ears is called noise pollution. Loudness of sound is measured in decibel. Decibel or dB is a ratio of loudness with reference to the softest audible sound.

When the loudness of the sound is irritating or undesirable, we regard it as noise pollution. Sounds beyond 80 dB can be regarded as polluting. The WHO has fixed 45 dB as the safe noise level for a city.

The source of outdoor noise worldwide is mainly caused by machines, transport, and propagation systems. Poor urban planning may give rise to noise disintegration or pollution, side-by-side industrial and residential buildings can result in noise pollution in the residential areas. Some of the main sources of noise in residential areas include loud music, transportation (traffic, rail, airplanes, etc), lawn care maintenance, construction, electrical generators, explosions, and people.

Sound becomes unwanted when it either interferes with normal activities such as sleep or conversation, or disrupts or diminishes one's quality of life. Noise-induced hearing loss can be caused by prolonged exposure to noise levels above 85 A-weighted decibels. Not only on humans, infrasonic waves may cause damage to buildings too.

Noise can have a detrimental effect on animals, increasing the risk of death by changing the delicate balance in predator or prey detection and avoidance, and interfering the use of the sounds in communication, especially in relation to reproduction and in navigation. These effects then may alter more interactions within a community through indirect effects. Acoustic overexposure can lead to temporary or permanent loss of hearing.

European robins living in urban environments are more likely to sing at night in places with high levels of noise pollution during the day, suggesting that they sing at night because it is quieter, and their message can propagate through the environment more clearly. Anthropogenic noise also reduced the species richness of birds.

Zebra finches become less faithful to their partners when exposed to traffic noise. This could alter a population's evolutionary trajectory by selecting traits, sapping resources normally devoted to other activities and thus leading to profound genetic and evolutionary consequences.

Underwater noise pollution due to human activities is also prevalent in the sea. Cargo ships generate high levels of noise due to propellers and diesel engines. This noise pollution significantly raises the low-frequency ambient noise levels above those caused by wind. Animals such as whales that depend on sound for communication can be affected by this noise in various ways.

The Hierarchy of Controls concept is often used to reduce noise in the environment or the workplace. Engineering noise controls can be used to reduce noise propagation and protect individuals from overexposure. When noise controls are not feasible or adequate, individuals can also take steps to protect themselves from the harmful effects of noise pollution. If people must be around loud sounds, they can protect their ears with hearing protection (e.g., ear plugs or ear muffs). In recent years, Buy Quiet programs and initiatives have arisen in an effort to combat occupational noise exposures. These programs promote the purchase of quieter tools and equipment and encourage manufacturers to design quieter equipment.

Noise from roadways and other urban factors can be mitigated by urban planning and better design of roads. Roadway noise can be reduced by the use of noise barriers, limitation of vehicle speeds, alteration of roadway surface texture, limitation of heavy vehicles, use of traffic controls that smooth vehicle flow to reduce braking and acceleration, and tire design. An important factor in applying these strategies is a computer model for roadway noise, that is capable of addressing local topography, meteorology, traffic operations, and hypothetical mitigation. Costs of building-in mitigation can be modest, provided these solutions are sought in the planning stage of a roadway project.

Aircraft noise can be reduced by using quieter jet engines. Altering flight paths and time of day runway has benefited residents near airports. Moreover awareness regarding noise pollution can help to control noise from a local level.