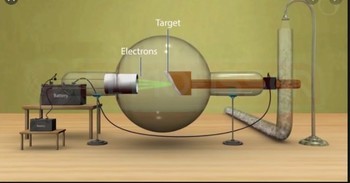 It is a modern X-ray tube . A coolidge tube is called so in honour of the scientist , William D. Coolidge . This tube was commonly used after the cold cathode tube . This tube is also called hot cathode tube because electrons are produced due to thermionic emission i.e. the thermal energy given to carrier overcomes the work function of the material .

Now, let's move with the working of this tube which has revolutionized the medical field .

First of let's learn how and why are X-rays produced ?

X-rays are produced when fast moving highly accelerating electrons are decelerated by striking on the target element of high melting point and high atomic number .

So , why high melting point  ?

Then , why high atomic number then ?

1. Direction collision with electron or  hucleus . As as you know from principle of conservation of momentum during collsion , velocity is decreased and so is KE.

2. Attractive force of nucleus i.e Electrostatic force i.e. F=(k Ze^2/r^2). So we can see that the force of attraction is  directly proportional to the atomic number and charge of nucleus i.e. Ze  Although we see here the inverse relation with radius but the nuclear charge effect dominates this radius effect  as on increasing quantum number , we have more orbitals to accomodate more electrons for the same orbit  We can somehow relate this with concept of chemistry with vander waal's force of attraction . Large size means more surface area and hence more vander waal's force resulting more melting or boiling point. But, this is not the sole cause for the determination of melting point.

-There is highly evacuated X-ray tube . If the tube is not evacuated , the thermions (electrons) may ionize the air and collide with them hence the tube is evacuated . And we couldn't obtain more X-ray photons which result to low efficiency.

It's basically the line focus principle . I am putting a  source link if you need more detail about it.. and it's little bit clear in the diagram below .

Cathode ::
- The cathode in the coolidge tube incorporates wound tungsten filament that emits electrons when heated .There is a low voltage supply for thermionic emission and there is cup shaped structure connected to the negative terminal of battery .To prevent the electron beam from dispersing due to repulsive forces between the electrons, the cathode filament is surrounded by a metal focusing cup at a high negative potential, that has the effect of converging the beam to a relatively small focal area on the anode.

-There is high tension voltage applied between anode and cathode arm so as to provide maximum kinetic energy to the electrons because we know :
W= 1/2*m*v^2 = eV  where V = voltage applied
- There is a cooling arrangement for the target element by using cool water and water is used because of it's high specific heat capacity .
If the machine has 100% efficiency then ,
eV =hf(max)
and f (max)=eV/h
In this minimum wavelength of X-ray can be calculated  which is equal to (ch/eV)
The whole arrangement is kept inside lead box because lead has maximum absorption coefficient which absorbs scattered X-rays and provides protection from the radiation .
In this way coolidge tube can be explained .
If you want to learn further you can click here .
And below are two images of line focusing  and coolidge tube . 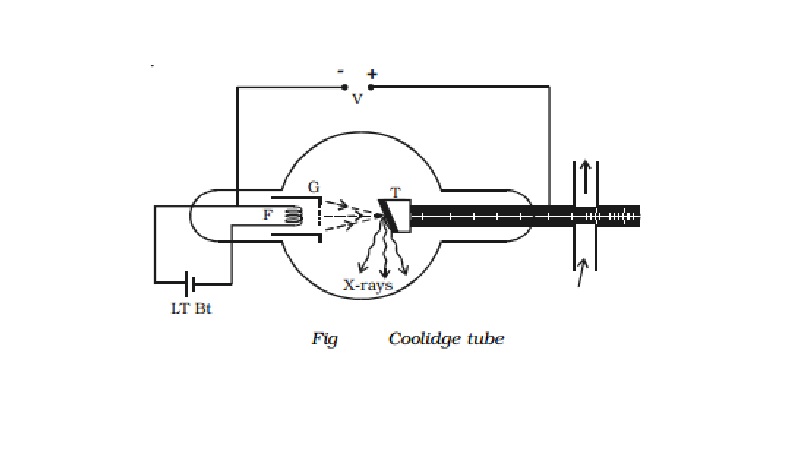 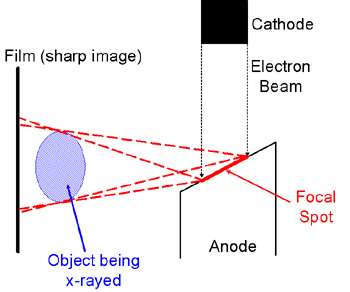 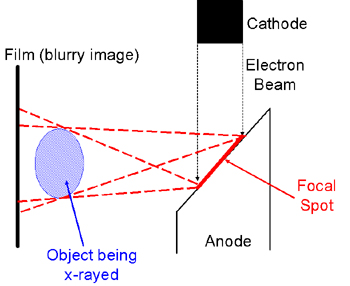