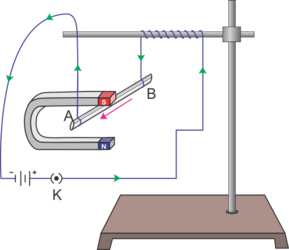 Force on a current carrying conductor

We know force on each electron is given by :

Where  is the current flowing through the conductor

In vector form, the Lorentz force can be written as

The vector  is taken in the direction of the current. The direction of this force is perpendicular to the plane containing  and . It can be found by using Fleming’s left hand rule or right hand palm rule.