Force, being a vector quantity can be added up or subtracted according to vector laws. So when a number of forces act on a body it can be at rest. We then say that the body is in equilibrium.

For the body to be in translational equilibrium, the resultant of all forces must be zero,

The product of the force and the moment arm is called moment of force or torque.

Torque is a vector and in vector form,

The direction of the torque is determined by the right hand rule. The unit of torque is N m. When we open or close a door, we apply a torque. It is observed that the moment of a force about a point through which the axis of rotation passes is zero. 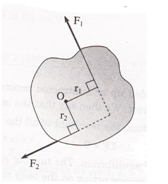 It states that when a body is in equilibrium under the action of a number of forces, then the algebraic sum of the moments of all these forces about any point is zero. That is, sum of clockwise moments must be equal to the sum of anticlockwise moments.

According to the principle of moment,

Torque due to a couple

Two equal and opposite forces acting on a body such that their lines of action do not coincide constitute a couple. The action of a couple is to produce rotational motion of a body. As shown in Fig below, both forces produce anticlockwise rotation on the rod AB about O. So, the moment of a couple is the sum of the moment of the two forces.

Some examples of couple are turning a tap, turning a cork screw, turning a screw driver and a compass needle in the earth's magnetic field.

The centre of gravity (CG) of a body is a point where the weight of the body acts and total gravitational torque on the body is zero.

The centre of gravity of a body depends on the shape and size of the body. The C.G., of different shape of bodies are given in the following table.