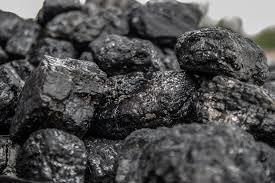 The fuels which are formed in nature by the decomposition and preservation of organic matter under high temperature and pressure for a long period of time are called fossil fuels.

Coal, oil and natural gas are the most important fossil fuels.

Anthracite due to having highest percentage(amount) of carbon content and is supposed to be the best and hardest coal among the four types of coal. Coals are found in Dang district of Nepal.

Coal is formed from the dead bodies of ancient plants. The large amount of trees and other plants were buried under the Earth during various processes like Earthquake, volcano, etc. These dead plants matter such as cellulose and lignin are decomposed by bacteria in the presence of oxygen and moisture and form humus. The humus formation is the first step in coal formation. But later on these bacteria die due to lack of oxygen under the Earth. Then due to high pressure and temperature of the Earth's crust for millions of years, the wood of trees/plants get hardened to give blackish colored carbon compound called coal.

Carbonization: Carbonization is the process of formation of coal from the plants due to high pressure and temperature inside the Earth.

1. It is an important source of heat energy.

2. It i also used to generate electricity.

3. It is used as a fuel in railway station.

4. It is used as a fuel in industries like iron, brick, etc.

5. The coal gas is used for heating and lighting purposes at homes.

6. It is used to make synthetic petrol, gas and various organic compounds. 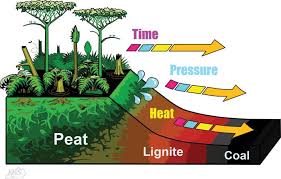 Mineral fuel is a mixture of hydrocarbons (about 90%-95%) and other substances like oxygen, nitrogen, Sulphur, etc. Mineral fuel is formed after the compression of fossils under sedimentary rocks for millions of years. For example: Petroleum products.

Petroleum: The fossil fuels mineral oil and natural gases together are called petroleum. It is a black colored, viscous, and foul smelling liquid fossil fuel found in nature.

Crude oil: It is the naturally occurring or extracted unrefined petroleum.

The mineral oil is formed due to decomposition of remains of small plants and the animals buried under the sea over million of years. Under the action of high pressure, high temperature of the sea-bottom and the bacteria, their dead bodies are converted into mineral oil by chemical decomposition.

1. It is used as a fuel in vehicles, industries, factories, etc.

2. It is used for generating electricity, cooking food, etc.

3.It is used for making various types of chemicals like plastics, fertilizers, insecticides, etc.

a. Natural gas: As a fuel

d. Petroleum ether: As a good solvent, for cleansing purpose

f. Gas oil and diesel oil: As fuel in vehicles

g. Kerosene: As a fuel

h. Petrol: As a fuel in vehicles. 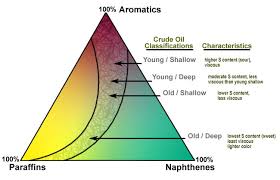 Natural gas is the mixture of about 95% of methane with about 5% ethane and propane. It is lighter and found in Earth's crust above the petroleum deposit.

1. It is used in domestic and industrial fuel.

2. It is used in manufacturing carbon black.

3. It is used for production of hydrogen gas.

4. It is used as compressed natural gas in automobiles and LPG also. 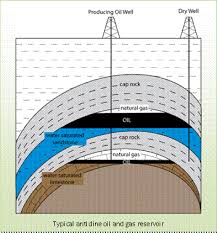