Charge is the property of matter that causes it to produce and experience electrical and magnetic effects. The study of the electrical charges at rest is called electrostatics.

There are two types of charges in nature : positive and negative. Like charges repel, and unlike charges attract, each other.

The SI Unit of charge is coulomb (C).It is scalar quantity.

1.Quantization of Charge :  Electric charge can have only discrete values, rather than any value. That is, charge is quantized. The smallest discrete value of charge that can exist in nature is the charge on an electron, given as  , e =  ± 1.6 x 10- 19 C

A charge q must be an integral multiple of this basic unit. That is,

2.Conservation of Charge : In an isolated system, the total charge remains constant. In other words, charge can neither be created nor destroyed. It can be transferred from one body to the other. Or, equal amounts of positive or negative charges can appear or disappear.

4.The magnitude of charge on a body is not affected by the speed of the body.

When charging a conductor by induction, a charged object is brought close to but does not touch the conductor. In the end the conductor has charge of the opposite sign as the charge on the object.

One way to carry out the four-step process:

3.    Remove the ground connection. The transferred electrons can't get back to where they came from.

4.    Remove the charged object. The net charge distributes itself over the surface of the conductor. 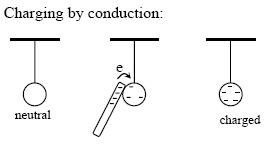 The surface density of charge is defined as the amount of charge per unit area of a charged surface. It is denoted by σ.

Here, Q is the charge distributed uniformly over the surface area (A) of a conductor. 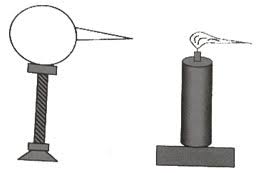