Condition for a quantity to be a vector:

The quantity should have a particular direction.

Here, the angle between vectors A and B is the the angle β. 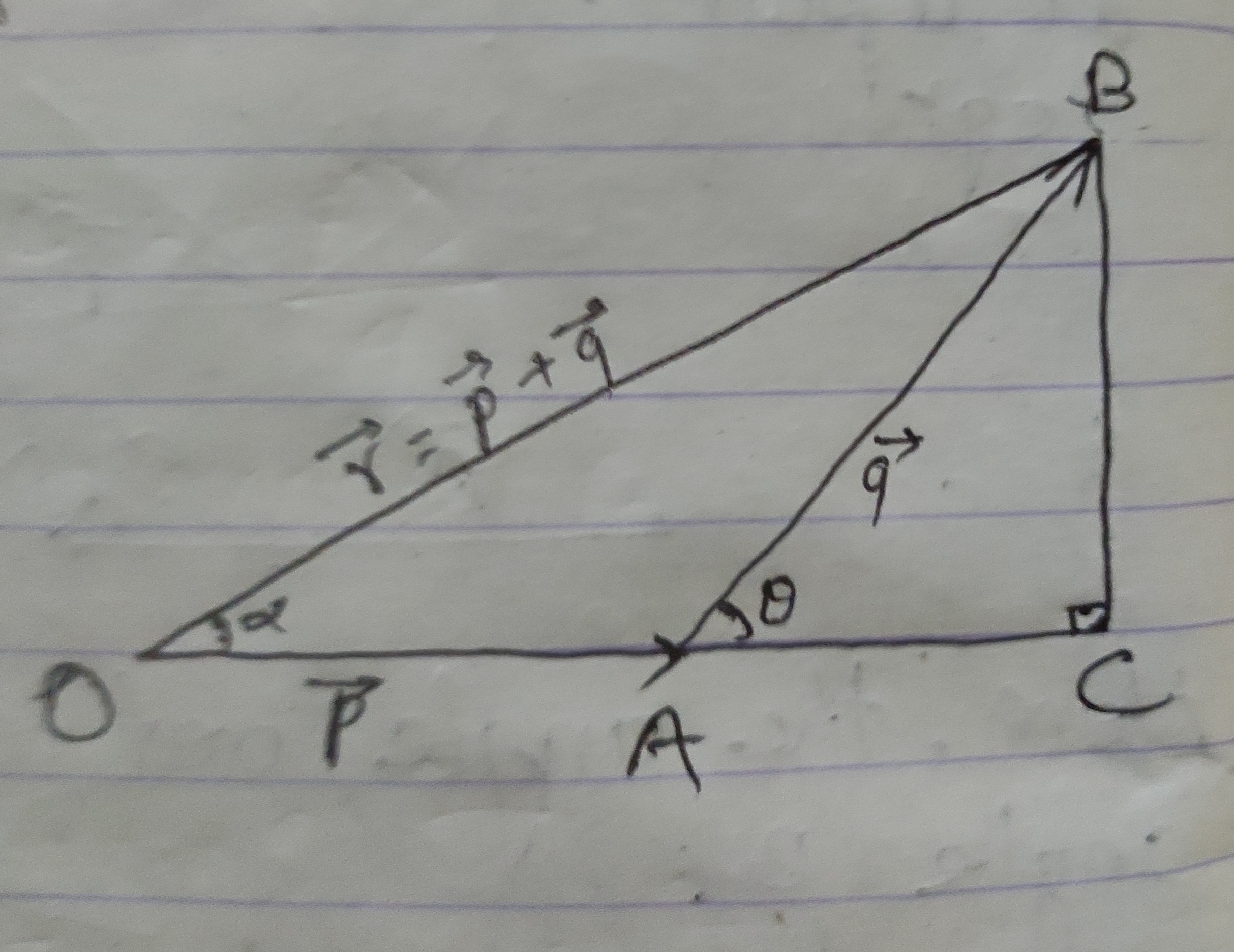 The resultant vector, r(= p+q) makes an angle α with the vector p. We produce OA and OC and draw BC perpendicular to OC. Let the q makes an angle Ɵ with OC. 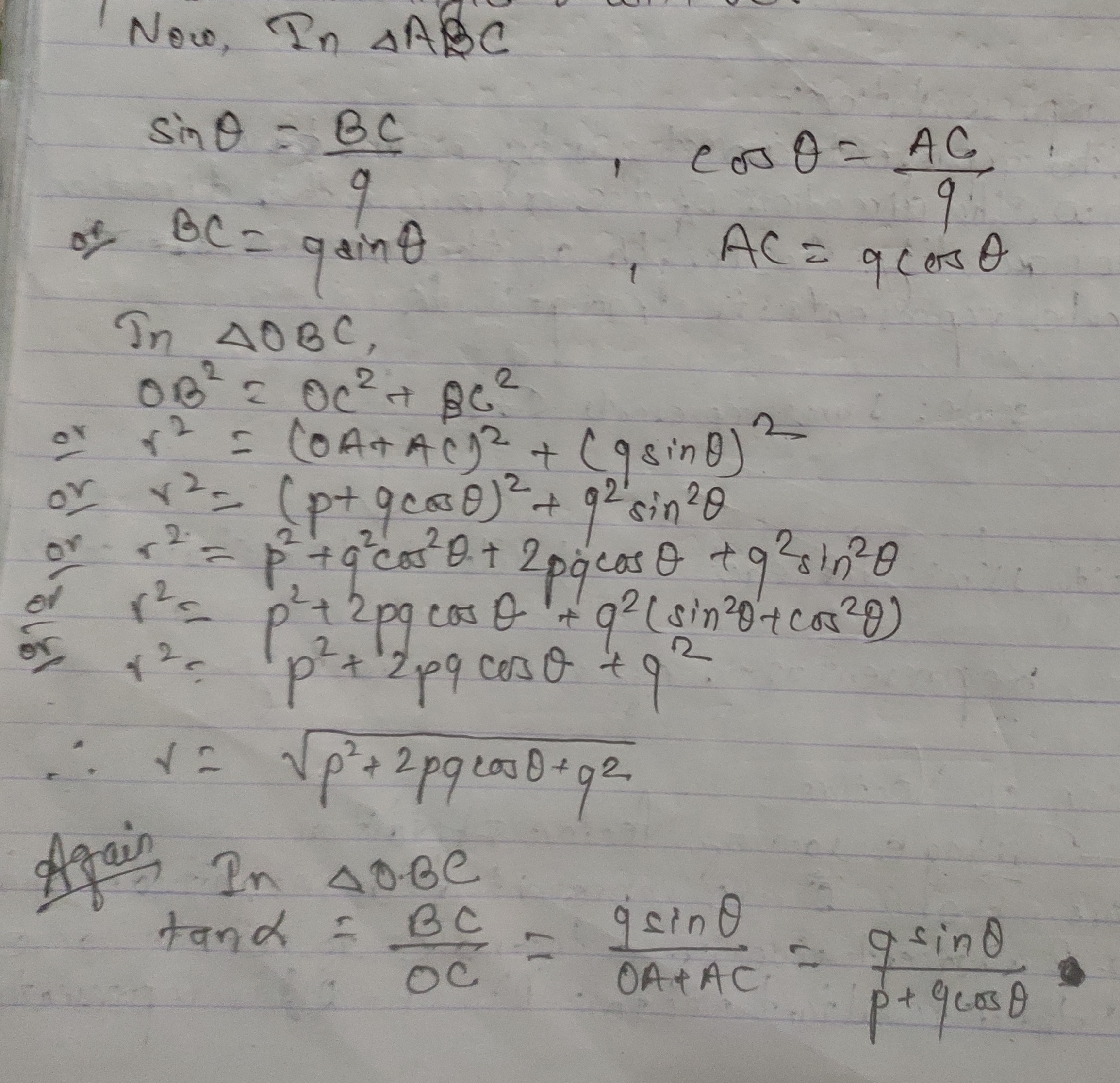 with respect to vector p respectively. 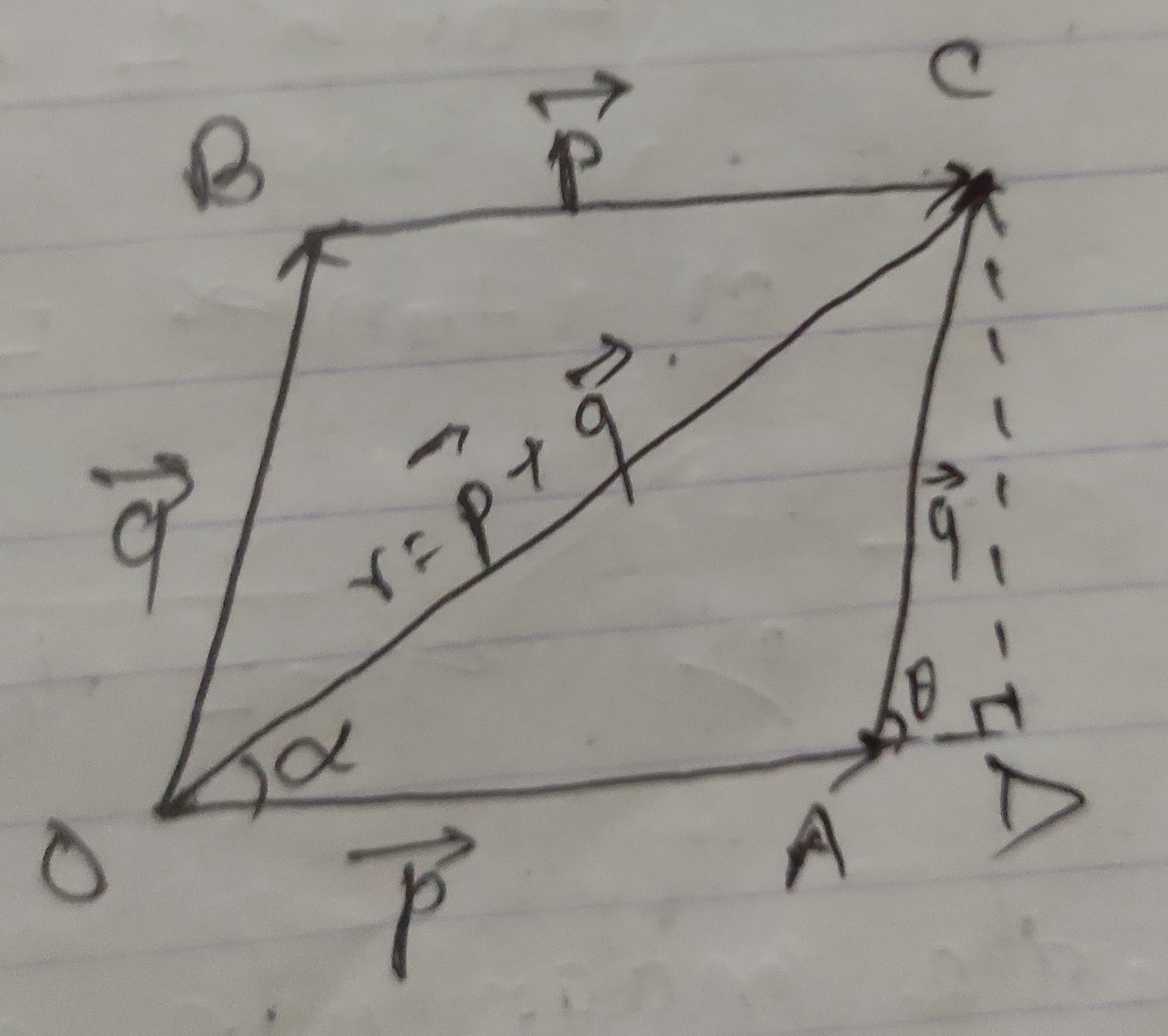 point O acting in such a way that these 2 vectors represent the 2 adjacent sides of a parallelogram, then the resultant of these 2 vectors, r(= p+q), vector OC is represented by the diagonal of the parallelogram from the same initial point. Vector OA is produced to OD such that CD is drawn perpendicular to OD. Resultant vector r and vector q makes angle α and 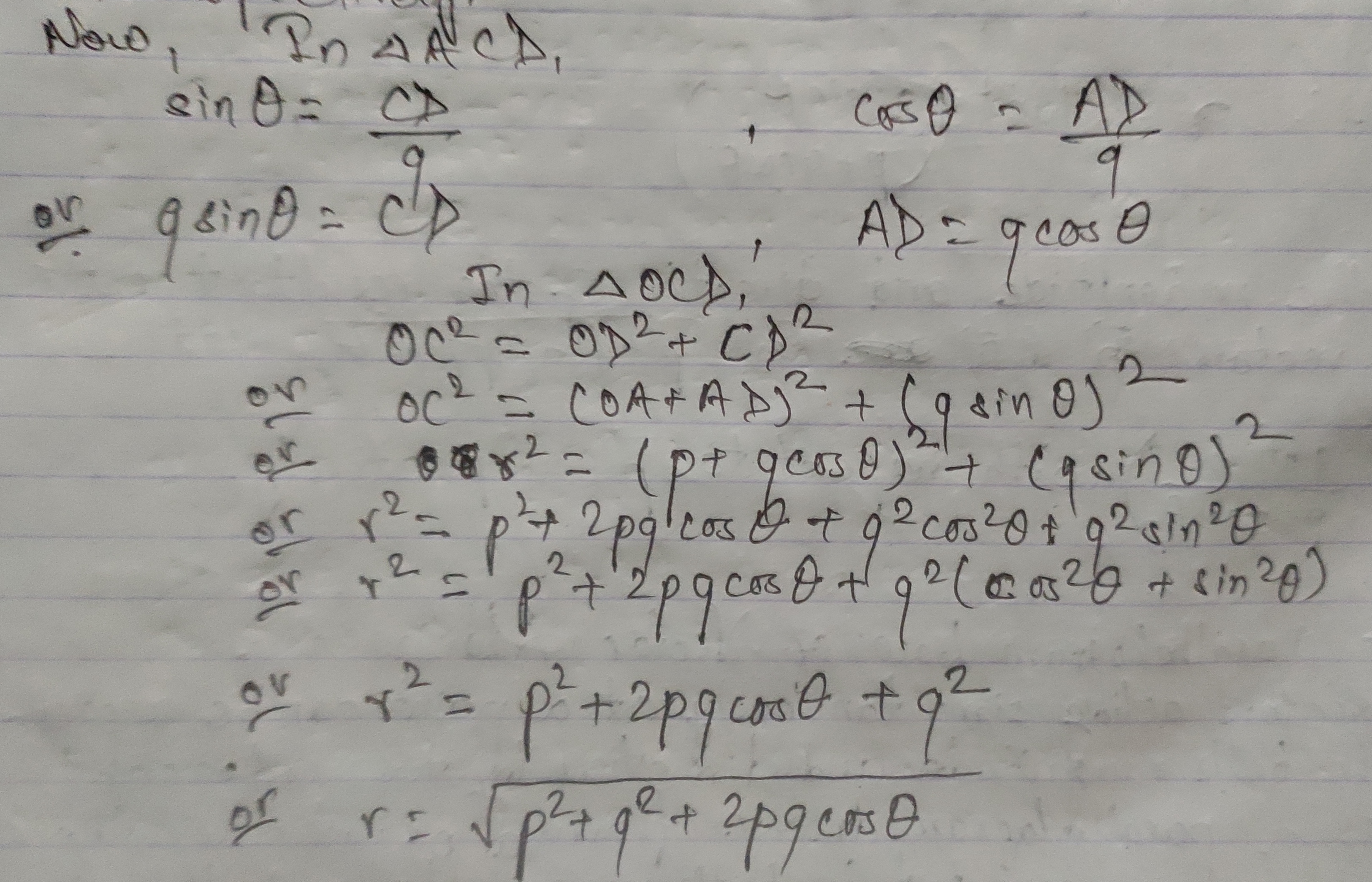 with respect to vector p respectively.

Law of Algebra for the Vector Sum:

Multiplication of a Vector by a Scalar

If vector A is multiplied by a scalar quantity m, the product mA is a vector that has same direction as A and magnitude m×|A|.

The direction may change as follows:

Laws of Algebra for Scalar Multiple

Multiplication of a Vector by a Vector

There is 2 kind of multiplication of a vector by a vector:

Consider vectors A and B with an angle Ɵ between 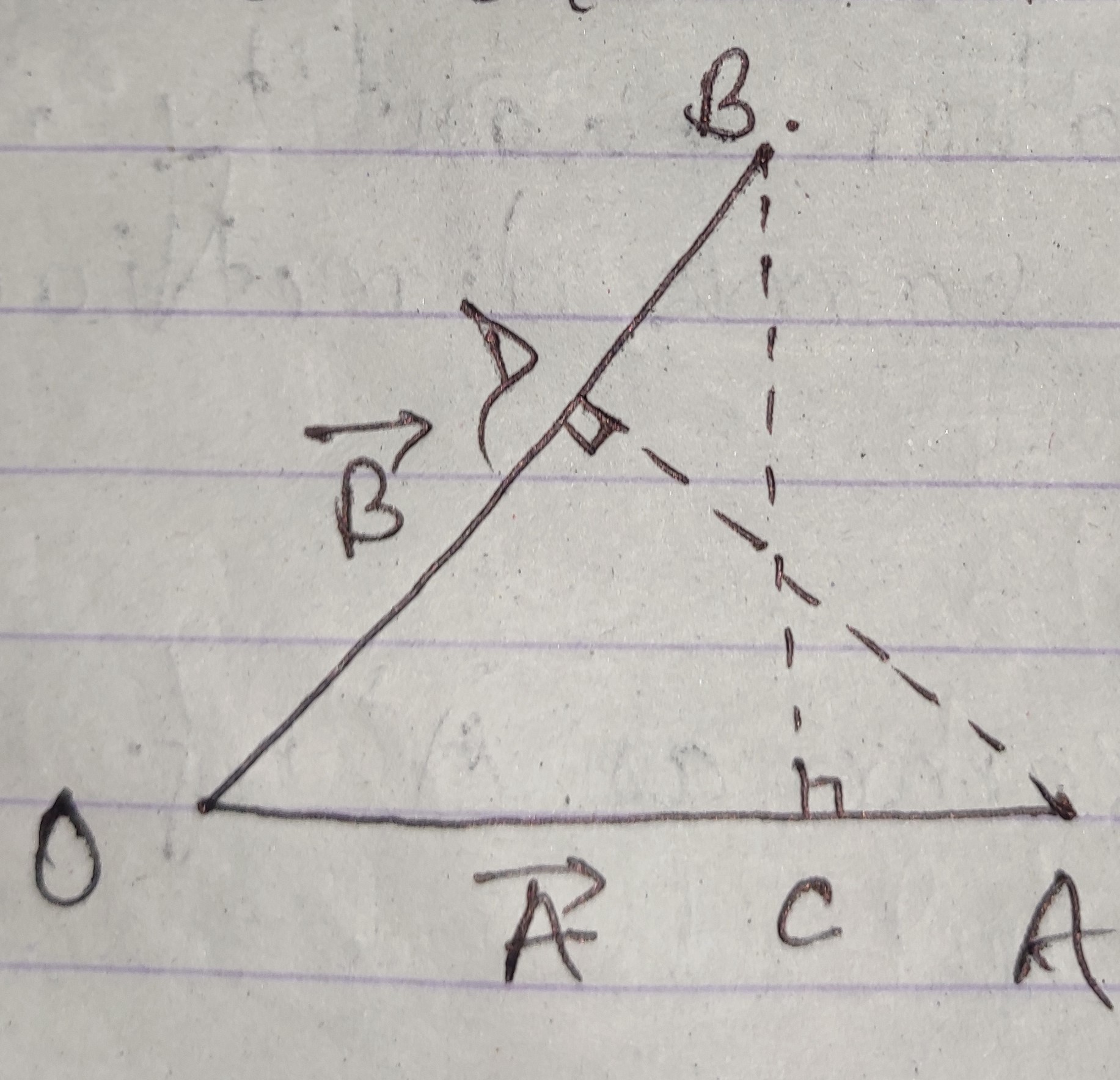 them as shown in figure. Then, the scalar product of them is given by

Since, A, B, cosƟ are scalars, product of vectors A and B is also scalar. Being scalar it has no direction.

It is also defined as the product of magnitude of one vector and scalar components of second vector along the direction of first vector.

Laws of Algebra for Dot Product:

It is denoted by cross(×) between 2 vectors. It has both magnitude and direction, so it is also called vector product.

Consider vectors A and B with smaller angle Ɵ 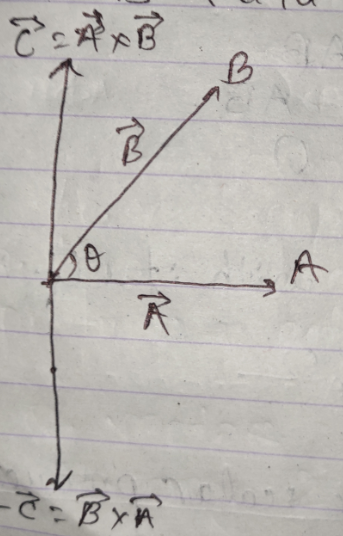 between them. Then the cross product of vectors A and B is given by vector C(= A×B). It is a vector because C is itself a vector. So, it has both magnitude and direction.

Its direction is along the line perpendicular to the plane containing vector A and vector B and is given by right hand thumb rule. 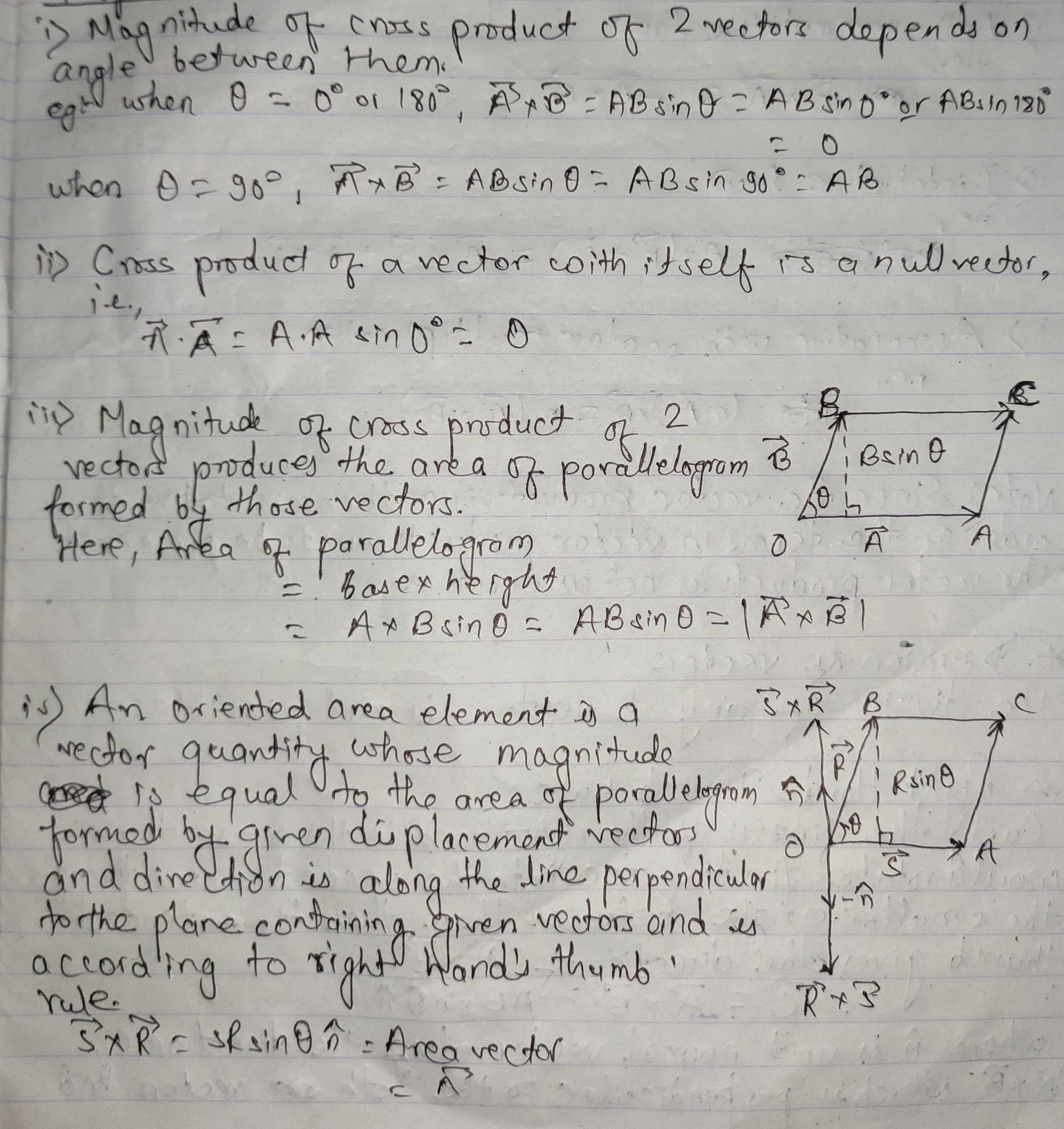 Laws of Algebra for Cross Product: 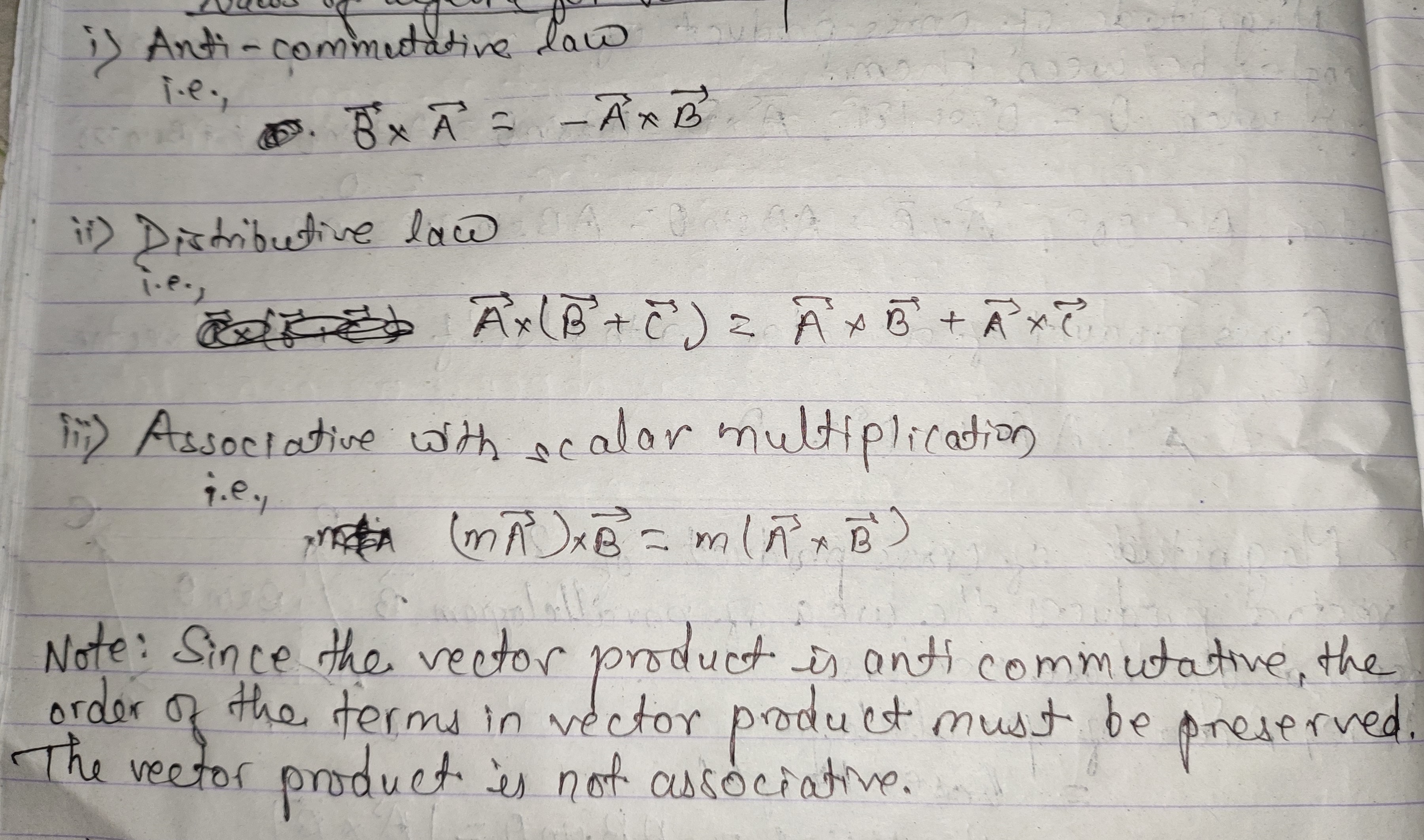 The division of any 2 vectors is not possible.

Curl the fingers of the right hand so that it would rotate first vector into the second vector through the smaller angle between them then the extended thumb gives the direction of vector C(= A×B).

Where n is unit normal vector along the direction of vector A×B which is perpendicular to both the vectors and to the plain containing two vectors.

Resolution of Vectors: The process of splitting a vector into 2 or more vectors in different directions on a plane such that their sum gives back the original vector is called the resolution of vectors.

The splitted vectors are called components of the vector.