Upasana Bista created in History of the Earth 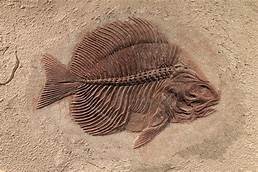 A fossil is the mark or impressions or hardened remains of dead body of a plant or an animal remained buried in the Earth's crust over a long period of time. Generally, fossils are present in sedimentary rocks. They are occasionally found on the surface of the Earth due to natural disasters or digs by human beings. When an organism is dead and is buried inside the Earth, its hard parts cast an imprint on the rocks and turn into fossils in millions of years under certain conditions. The process of conversion of dead organism  into fossil over millions of years is called fossilization. The branch of science that studies about fossils and process of fossilization is called Planetology. Generally fossils are not real body parts but they are the imprints made on the sedimentary rocks. Mostly hard part of the body make  imprints while the soft parts are already decayed. Some rare fossils like dinosaurs, mammoths, etc. suggest that soft tissues also might be fossilized.

How are fossils formed?

In the pre-historic earth, there were frequent evolutions and extinctions of organisms. When these organisms died, they were buried into the Earth's crust before they decayed or were eaten up by other organisms. As most of the organisms got decomposed or eaten up by other animals, not all dead organisms turned into fossils. Generally, fossilization occurs in aquatic habitat as sediments deposit over the organisms in short period of time. Fossilization might also occur in areas of flooding and soil erosion. In some cases, it was found that not only the hard parts but soft tissues also get preserved. This process of fossil formation is called  soft tissue preservation.

The process of fossil formation includes:

1.  From the remaining hard parts of plants and animals buried under the earth during various natural disasters or processes like volcano, earthquake, sea-storms, etc. over many years.

2.  Vacant spaces(casts) and mold( the hollow space in sediment) left when the entire body or parts of the plants and animals are buried under the earth, after decaying of their soft parts. 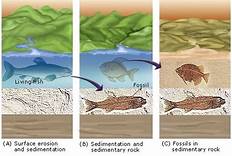 i) studying the imprint of skeletons like teeth, bones, claws, shells and skull.

ii) studying the geometrical structure of the whole body or the part of an organism.

iii) studying the tracks and trails of organisms which have been made on the soil.

iv) comparative study of the body parts of different organisms.

i] Fossils help to map the geological age of the rock layers.

ii] They help to understand about the evolutionary patterns of different organisms.

iii] They help us study about prehistoric plants and animals.

iv] Fossils tell us about migration of organisms in the past.

v] Fossils give us evidences about the existence of ancient human beings.

vi] Coal, mineral oil and natural gases are formed from fossils. So, they help in investigation of presence of these reservoirs in the Earth's crust.

vii] The comparative study of fossils helps in the comparison of the rocks of different places.

viii] They help to know about extinct plants and animals.

ix] They help to make/know about geological time table.

x] It helps us know correct order of succession of rock beds.

The fuels like coal, petroleum, and natural gases which are obtained from fossils of plants and animals by the process of fossilization are called fossil fuels.

Note:  Sedimentary rocks are formed by the sedimentation of various materials. The sediments that bury the dead organisms convert into fossil due to extreme pressure, temperature and bacterial action. So, fossils are mostly found in sedimentary rocks.