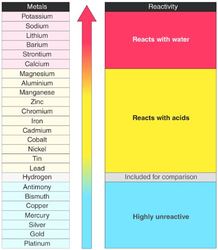 Metals have a capacity of losing electrons from their outermost shell. So, they gain positive charge during a chemical reaction. The capacity of a metal to donate electrons depends upon the size of the atom. The large sized metallic atom donates electrons easily from its outermost shell. The size of atoms increases as we go down the group. Thus, it increases the possibility of losing electrons. Hence, the reactivity increases as we go down the group. For example, Na is more reactive than Li.

The ascending order of reactivity of elements in group IA is: Li<Na<K<Rb<Cs<Fr.

The ascending order of reactivity of elements in IIA group is: Be<Mg<Ca<Sr<Ba<Ra.