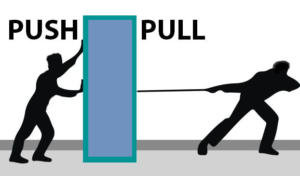 The gravitational force is the force of mutual attraction between any two objects by virtue of their masses. It is a universal force. Every object experiences this force due to every other object in the universe. All objects on the earth, for example, experience the force of gravity due to the earth. In particular, gravity governs the motion of the moon and artificial satellites around the earth, motion of the earth and planets around the sun, and, of course, the motion of bodies falling to the earth.  It plays a key role in the large-scale phenomena of the universe, such as formation and evolution of stars, galaxies and galactic clusters. It is the weakest force in existence.

Electromagnetic force is the force between charged particles.  In the simpler case when charges are at rest, the force is given by Coulomb’s law: attractive for unlike charges and repulsive for like charges. Charges in motion produce magnetic effects and a magnetic field gives rise to a force on a moving charge. Electric and magnetic effects are, in general, inseparable – hence the name electromagnetic force. Like the gravitational force, electromagnetic force acts over large distances and does not need any intervening medium. It is enormously strong compared to gravity. The electric force between two protons, for example, is 1036 times the gravitational force between them, for any fixed distance. Matter, as we know, consists of elementary charged constituents like electrons and protons. Since the electromagnetic force is so much stronger than the gravitational force, it dominates all phenomena at atomic and molecular scales.  (The other two forces, as we shall see, operate only at nuclear scales.)  Thus it is mainly the electromagnetic force that governs the structure of atoms and molecules, the dynamics of chemical reactions and the mechanical, thermal and other properties of materials.  It underlies the macroscopic forces like ‘tension’, ‘friction’, ‘normal force’, ‘spring force’, etc. Gravity is always attractive, while electromagnetic force can be attractive or repulsive.  Another way of putting it is that mass comes only in one variety (there is no negative mass), but charge comes in two varieties: positive and negative charge. This is what makes all the difference.  Matter is mostly electrically neutral (net charge is zero). Thus, electric force is largely zero and gravitational force dominates terrestrial phenomena. Electric force manifests itself in atmosphere where the atoms are ionized and that leads to lightning.

If we reflect a little, the enormous strength of the electromagnetic force compared to gravity is evident in our daily life.  When we hold a book in our hand, we are balancing the gravitational force on the book due to the huge mass of the earth by the ‘normal force’ provided by our hand.  The latter is nothing but the net electromagnetic force between the charged constituents of our hand and the book, at the surface in contact. If electromagnetic force were not intrinsically so much stronger than gravity, the hand of the strongest man would crumble under the weight of a feather! Indeed, to be consistent, in that circumstance, we ourselves would crumble under our own weight!

The strong nuclear force binds protons and neutrons in a nucleus. It is evident that without some attractive force, a nucleus will be unstable due to the electric repulsion between its protons. This attractive force cannot be gravitational since force of gravity is negligible compared to the electric force. A new basic force must, therefore, be invoked. The strong nuclear force is  the strongest of all fundamental forces, about 100 times the electromagnetic force in strength.  It is charge-independent and acts equally between a proton and a proton, a neutron and a neutron, and a proton and a neutron. Its range is, however, extremely small, of about nuclear dimensions (10–15m). It is responsible for the stability of nuclei. The electron, it must be noted, does not experience this force. Recent developments have, however, indicated that protons and neutrons are built out of still more elementary constituents called quarks.