Travelling Through The Dark 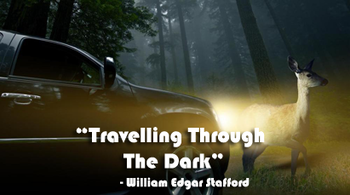 Traveling Through The Dark

In the poem. 'Travelling through the dark' Stafford presents a great tension between two systems of life. One is the responsibilities and efficiencies of life whereas other is a human emotion and its outcome. In the global context, he shows the destructive nature of people which results in the miserable condition of natural beauty. This poem is also remarkable to depict the indifference for others' pain,

The poet, driving at night, finds a dead pregnant deer on the edge of the Wilson River road. He thinks to roll the dead body into the gorges as the road was very narrow. Poet stops his car and goes near to the deer to observe it minutely. He finds the deer stiffened already and almost cold. He drags the body to the side and gets belly large. By touching its side, the poet finds fawn still living and waiting for a way to come out. Poet realizes that fawn would never be born from dead mother. He shows pity for them. The parking light of the car was flashing ahead and the low continuous sound of the engine was going on. Standing in warm red fume, the poet feels that the wilderness was listening to him. After long thinking, he pushes doe into the river.

In this poem, the poet exposes the changing nature of the human mind. The final pushing of the doe into the river fulfills both mental and physical action. This poem attacks over the so-called nature lover, who is solely responsible for its destruction. Ironically poet satirizes over the careless driver and the people, who show pity only towards fawn, not to the doe. It also seems life is full of pain and suffering but it should go on.