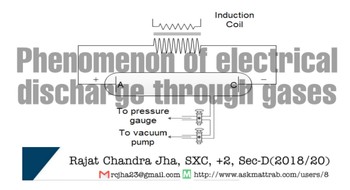 Discharge : The passage of electricity through gas is called discharge

Discharge of electricity through a gas at various pressure

Figure 1 represents the experimental arrangement to study the discharge of electricity through gases.

it consists of strong glass tube (G) of length 30 cm and diameter about 4 cm with a site tube (T) through which the gas can be evaluated by a high vacuum pump. The glass tube (G) contains two aluminium electrodes C and A across which a high potential difference can be applied by joining them to the two ends of the secondary of a powerful induction coil.

Starting with air inside the tube, no discharge is observed at normal atmospheric pressure. When the pressure is reduced to about 10 mmHg, then blue luminous light streaks are observed with crackling sound.

When the pressure is reduced to about 5 mmHg the streamers or streaks are broken out into a uniform luminous column called the positive column (Figure 2). The colour of this luminous column depends on the nature of the gas, reddish with air, bright red with neon, red with nitrogen, blue with hydrogen, white with carbon dioxide etc.

When the pressure is reduced to about 1 mmHg, then a negative glow is detached from the cathode and moves to the right (Figure 4). Another glow appears at the cathode called the cathode glow. In between these two glows, there is another dark space call Crooke's dark space.

When the pressure is reduced to about 0.1 mmHg, then the Crooke's and Faraday's dark spaces are lengthened and the positive column breaks up into alternate bright and dark luminous disk called striations (Figure 5). At this stage, a glow appears at the anode glow.