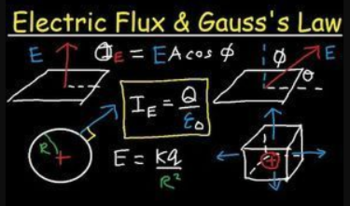 From the SI units of E and A, we see that  has units of newton meters squared per coulomb (N .m2/C). Electric flux is proportional to the number of electric field lines penetrating some surface.

In this discussion, the angle Ɵ is used to describe the orientation of the surface of area A.

and is independent of the shape of that surface.

represents the net charge inside the surface.

A gaussian surface is an imaginary surface you construct to satisfy the conditions listed here. It does not have to coincide with a physical surface in the situation.

In choosing the surface, always take advantage of the symmetry of the charge distribution so that can be removed from the integral. The goal in this type of calculation is to determine a surface for which each portion of the surface satisfies one or more of the following conditions:

1. The value of the electric field can be argued by symmetry to be constant over the portion of the surface.

2. The dot product in Equation

can be expressed as a simple algebraic product E dA because  and  are parallel.

3. The dot product in Equation

is zero because  and  are perpendicular.

4. The electric field is zero over the portion of the surface.