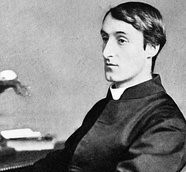 God's Grandeur is Italian sonnet, divided into an octave and sestet (abbaabba, cdcdcd), which describes god's greatness in the present materialist world. By using lofty imagination, Hopkins praises the magnificence and glory of God in the world.

Hopkins says that the world has been charging with the grandeur of god-like an electric current, It is shilling like a thin sheet of metal and gathering like the flow of oil. Although the greatness of God is endless but modern people have no fear at all for their mischief and for the punishment rod of god. Generations have been passing since years only giving priority for and material pleasure. They have become crazy about commercial achievement and material success. People are blind towards their miserable conditions. They have been laboring so hard that they are full of dirt and have lost their senses.

Hopkins argues that beautiful nature and its resources have been destroyed. In spite of such preserving 'natural beauty and its phenomena. After every season's new freshness arises as night invites lovely morning. Poet says that god is brooding (protecting) its creation like a dove giving warmth and love fledglings.

Hopkins expresses his deep belief in the power of God. For him, the freshness of God can’t be made ugly. He further argues that it is the men’s failure to recognize the greatness of God. Hopkins attacks the materialistic nature of men and shows their hollow condition. He suggests mankind follow the spiritual path for eternal peace.