Describe the life cycle in Spirogyra. 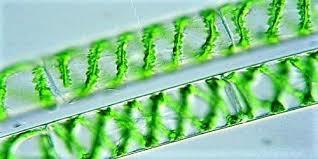 Describe the life cycle in Spirogyra.

Ans:  The life cycle of spirogyra is completed in the following ways.

Vegetative reproduction; fragmentation, is caused is the death of some intercalary cell, or by the injury. Filaments break into two or several small pieces. Each fragment consists of one or few living cells.

Asexual reproduction: it takes place by the following methods:

2. Aplnospore: Aplanospore is thin-walled non-motile spores. They arise singly inside the cells. The protoplast of cells loses the water and contracts. It rounds off and secretes the thin wall around it form aplanospore. The parent cell when rupture it released down.

Occur in between the cell of the same filament. It takes place in two ways:

a) Indirect lateral conjugation: in this method the two adjacent cells develop papillae on the lateral sides of the septum. The common wall is ruptured by the action of an enzyme. Both gametes fuse to form a zygospore.

It is a primitive type of conjugation.  The lower surface behave as female and upper surface behaves as male in the same filament the male gametes produced boring organ, this conical process produced the pore in the middle of the septum. These two gametes fuse to form the zygospore.

The zygospore is made up of three layers wall around themselves and represent the diploid phase, by the decay of this layer of the female gametes and sink to the bottom of the water.  During the germination, the zygospore divides mitotically, four haploid nuclei. Three of these haploid nuclei degenerate.

The zygospore form a single filament. On return of favorable conditions, the zygospore absorbs water and swells up. The outer two-layer burst and the inner layer to form the germ tube, it divides transversely to form the two-celled structure. The lower cell is colorless and functions as a rhizoid. The upper green cell divides repeatedly to form a new filament.