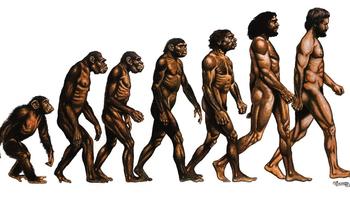 Scientists TH Huxley was the first who wrote book about the evolution of man in 1863. Similarly Charles Darwin in 1871 published the book called Descent of Man. Similarly their came many scientist who discovered human fossils and wrote books in different ways. It is believed that ape like animals were evolved during Miocene period and man like creature developed in the Pliocene period of Cenozoic era.

To study human evolution in brief can be present as follows;

2. Prior to the ape man including pre-historic man.

3. Prior to the prehistoric man including modern man or man of today. 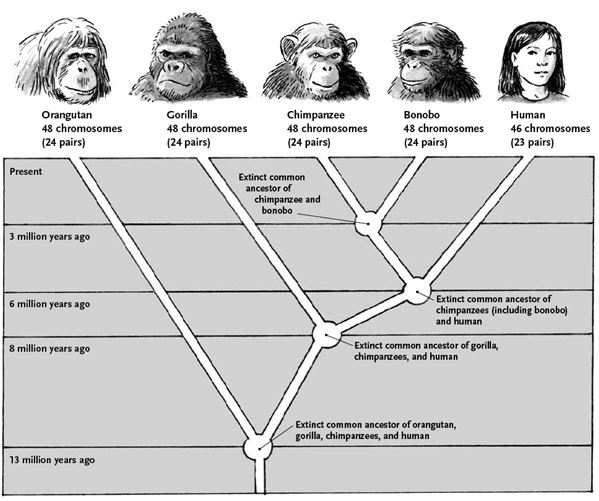 Ape man was developed from the Miocene period with having more or less similar characters of the modern man.

Anthropologists Lewis 1930, leaky 1955 have discovered fossil of ape man from the different regions of the world. On the basis of the fossil character some of the ape man is as follows:

2. Prior to the ape man including pre-historic man:

After the ape men evolved man like pre historic man nearly from Pliocene period. There are many fossils of the pre historic men. Some the fossils are as follows;

Similarly from the different parts recorded the fossils of the following pre-historic men;

Java man, extinct hominin known from fossilremains found on the island of Java, Indonesia. It is discovered by the Dutch anatomist in the early 1890s were the first known fossils of the species Homo erectus.

Java man was characterized by a cranial capacity averaging 900 cubic cm (smaller than those of later specimens of H. erectus), a skull flat in profile with little forehead, a crest along the top of the head for attachment of powerful jaw muscles, very thick skull bones, heavy browridges, and a massive jaw with no chin. The teeth are essentially human though with some apelike features, such as large, partly overlapping canines. Thighbones show that Java man walked fully erect, like modern man, and attained a height of about 170 cm (5 feet 8 inches).

Peking man, extinct hominin of the species Homo erectus, known from fossils found at Zhoukoudian near Beijing. Peking man was identified as a member of the human lineage by Davidson Black in 1927 on the basis of a single tooth.

Peking man is characterized by a cranial capacity averaging about 1,000 cubic cm, though some individual skull capacities approached 1,300 cubic cm—nearly the size of modern man’s. Peking man had a skull that was flat in profile, with a small forehead, a keel along the top of the head for attachment of powerful jaw muscles, very thick skull bones, heavy browridges, an occipital torus, a large palate, and a large, chinless jaw. The teeth are essentially modern, though the canines and molars are quite large, and the enamel of the molars is often wrinkled. The limb bones are indistinguishable from those of modern humans.

Neanderthals are our closest extinct human relative. Some defining features of their skulls include the large middle part of the face, angled cheek bones, and a huge nose for humidifying and warming cold, dry air. Their bodies were shorter and stockier than ours, another adaptation to living in cold environments. But their brains were just as large as ours and often larger - proportional to their brawnier bodies.

Neanderthals made and used a diverse set of sophisticated tools, controlled fire, lived in shelters, made and wore clothing, were skilled hunters of large animals and also ate plant foods, and occasionally made symbolic or ornamental objects. There is evidence that Neanderthals deliberately buried their dead and occasionally even marked their graves with offerings, such as flowers. No other primates, and no earlier human species, had ever practiced this sophisticated and symbolic behavior.

The common character of the latest Pre historic man is as follows;

1. They walked in almost erect posture.

3.Prior to the prehistoric man including modern man or man of today:

The latest prehistoric man is consider as Cro-Magnon man which  were lived since 1.5 lakhs years back of become extinct since 15,000 years back. The fossils of this man were recovered by Anthropologist Mac. Gregot in 1868 in sedimentary rocks called Cro–Magnon rocks, first in Germany, Then in France, Czeehkaslovakia. The fossils analyzed the following characters:

2. More intelligent than the prehistoric men.

6. Used animal skin as cloth, lived in colonies or in families.

9. Development of communication or language etc. Before the extinction of Cro-Magnon man, they migrated in three different regions.

After the extinction of Cro-Magnon man came into existence man of today or modern man Homosapienswith more developed character such as; site of intelligence increased although cranial capacity slightly reduced to 1500-1550cc, developed various communicating ways or languages, enter into the age of aluminum age, discovered many technologies in the various fields, completely erect body, etc.

In these manner modern man is also on the ways of changing thus probably in the future will changed into Homosapiensfutureless with further developed characters.