An economic shock refers to any change to fundamental macroeconomic variables or relationships that has a substantial effect on macroeconomic outcomes and measures of economic performance, such as unemployment, consumption, and inflation. Due to this virus, we have been facing many problems as like the shortage of stocks as many factories were closed due to the lockdown. There was and is no kind of external or internal transportation of raw material or finished products. The outbreak of the virus has made many people’s life, from many countries all around the world miserable. The economy of the world has been in shock after the effect of the pandemic. A year and a half since the onset of the COVID-19 pandemic, the global economy is poised to stage its most robust post-recession recovery in 80 years in 2021. But the rebound is expected to be uneven across countries, as major economies look set to register strong growth even as many developing economies lag.[1]

As per the world bank, the global growth is expected to accelerate to 5.6% this year, largely on the strength in major economies such as the United States of America and China. The United State of America and China are said to contribute about one-quarter of global growth in 2021. According to the World Bank, China’s economy didn’t contract last year in the first phase of the virus outbreak, is expected to grow a solid 8.5% and moderate as the country’s focus shifts to reducing financial stability risks. 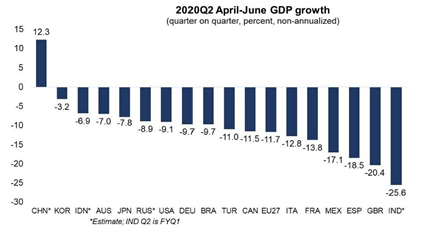 The figure below shows a comparative graph of the per capita income growth relative to advanced economies. 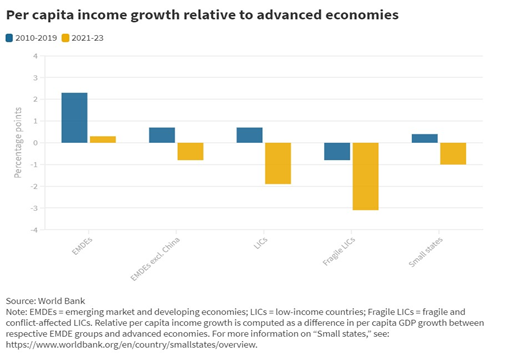 In the graph, there is an increment in the economy till 2019 on an average but after 2021 it was estimated to be decreased which at the moment is coming true.