A black hole is a region of space-time where gravity is so strong that nothing—no particles or even electromagnetic radiation such as light—can escape from it. As we all know that when we read about something there is always a title given to a particular person as the ‘Father’ but here we have ‘2’ one is the great Albert Einstein and the other is Dr. Stephan Hawkings.  A black hole can be described as a star, which is normally thrice the mass of our sun, is contracted into a very small volume, most likely to an area with a radius of 3 km. This happens when the death of a massive star occurs. Not only this but a black hole can be of different kinds, one of the teachers Dr. Stephan Hawking said during class that not only a star’s death but also when the earth can be contracted into a size of a peanut, and if any City in the US can be contracted into a size of an Atom, it will form a black hole. Comparing Biology and Cosmology, there is a small coincidence that the figure that we see during the death of a star, we can find the same figure as the birth of a new cell. 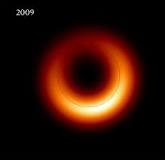 It portrayed M87*, the supermassive black hole at the center of the M87 galaxy, some 17 megaparsecs (55 million light-years) away. The researchers constructed the picture by combining radio-frequency signals they had collected from observatories across Earth over two nights in April 2017.

How do scientists locate black holes?

The black holes in the Universe do not emit any detectable type of light. However, astronomers can still find them and learn a lot about them. They do this by measuring the visible light, X-rays, and radio waves emitted by material in the immediate environment of a black hole.

A black hole can be shown as follows in a 2-dimensional figure. 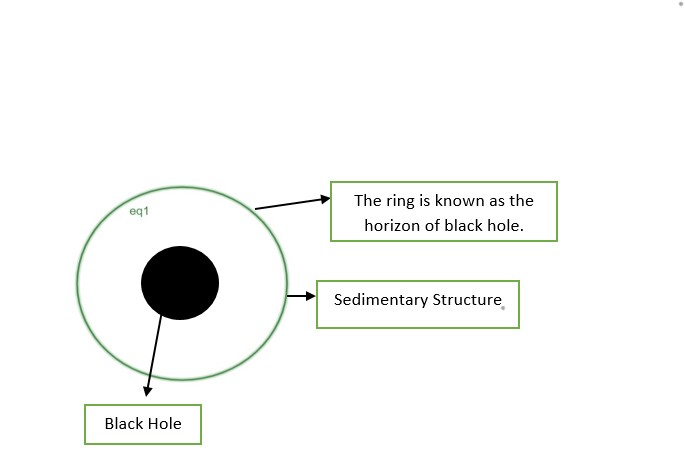 According to the label the figure above, we might have understood what a black hole would look like in a 2-dimensional figure. Explaining it, we can say that, the black hole is at the center, that has a radius, with respect to mass;

Where M is the total mass of the object at the beginning, G is the universal gravitational constant whose value is 6.67×10-11 and C is the velocity of light in a vacuum.

Next formula that can be found of the radius is, building a black hole with the help of a photon thrown into a mass center at one particular time. Mass of photon doesn’t make any big difference but a mass of photon which is thrown into the black hole has wavelength which is equal to R at that time i.e.

where the change in energy after the addition of the photon is, let’s say.

solving these equations by following Einstein’s formula of E=mc2, the change in radius after one photon is added in it, will be.

That means there is no anything variable in the above equation, which simply means that it is a constant. So the change in surface area of the black hole is constant. Whose actual value isn’t known, So change in the area can simply be written as Area(A).

Talking about randomness, i.e. by solving the equation above we finally get the entropy as:

Where S is the entropy. Entropy is defined as a measure of randomness or disorderliness of the system.

And if a body has both entropy and energy then it is certain it contains some temperature i.e. from an equation dE= T. dS.

Where T=ħ/8πMG i.e. according to Hawking’s radiation. 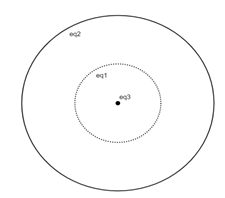 If we take Stephan Hawking’s theory quite seriously, In the above figure, the eq2, shows the universe at its extremities, basically the whole universe. Equation 1 shows the universe shrinking into a smaller size. And the 3rd equation shows the space-time singularity. This is a place where everything freezes. Going from equation 2 to equation1, we will be experiencing a drastic change in the time we are currently living in. The Greek philosopher Aristotle spelled out a fairly modern-sounding definition of time as “the calculable measure of motion with respect to before and after ness. Time isn’t something that we read in the clocks, or we find during any experiment of making a new clock. It is something, that normally no one has ever known. I don’t know the exact definition of time neither I have a theory, but time is simply not what we believe it is. Talking about the space-time singularity, we can somehow say that, if we can get to the space-time singularity, somehow I don’t know how to get there since no such machine has been made that can pass through the horizon of the black hole, then we can actually travel through the time. That is if we got through the space-time singularity then we will be at a place where we will be everywhere but nowhere, simply speaking we will be at such a place where we will have access to past, present, and the future at the same time.

As we saw in the figure of a black hole, we can say that a black hole is simply a circle. But no, not everything we see always has to be true. The diameter of a black hole is a lot bigger than its circumference. Taking an example of a trampoline which is known as a space-time plane. 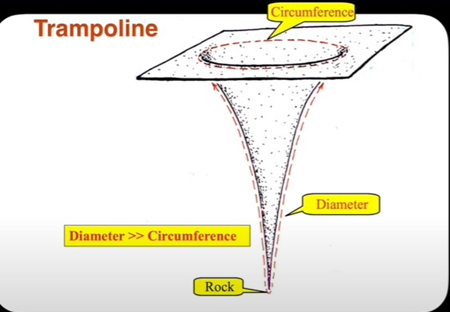 There’s a video on Youtube which I certainly didn’t watch this time. (The link to the video will be provided in the Bibliography). The video explains the working of gravity and space-time.

Everything I tried to explain in the above discussion can be pictured as follows; 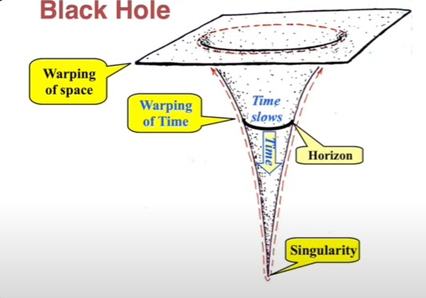 The reason why we will not be able to know anything about the black hole using the technologies of the present is that nothing that gets into it comes out. It’s a point of no return. Though we say that we will get stretched while passing through the black hole but no it’s no such thing. It’s simple, we get in it but we won’t be stretched. We will go down through the circumference we tend to reach the Horizon. That means we just won’t be able to return back but we won’t be stretched.