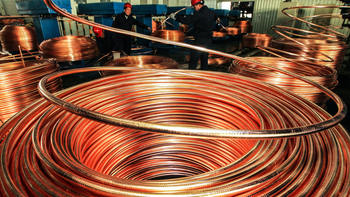 Extracting copper from its ores

The method used to extract copper from its ores depends on the nature of the ore. Sulfide ores such as chalcopyrite ( CuFeS2 ) are converted to copper by a different method from silicate, carbonate or sulfate ores. Chalcopyrite (also known as copper pyrites) and similar sulfide ores are the commonest ores of copper. The ores typically contain low percentages of copper and have to be concentrated before refining (e.g., via froth flotation).

The concentrated ore is heated strongly with silicon dioxide (silica) and air or oxygen in a furnace or series of furnaces.

The copper(II) ions in the chalcopyrite are reduced to copper(I) sulfide (which is reduced further to copper metal in the final stage).

The iron in the chalcopyrite ends up converted into an iron(II) silicate slag which is removed.

Most of the sulfur in the chalcopyrite turns into sulfur dioxide gas. This is used to make sulfuric acid via the Contact Process.

An overall equation for this series of steps is:

The copper(I) sulfide produced is converted to copper with a final blast of air.

The end product of this is called blister copper - a porous brittle form of copper, about 98 - 99.5% pure.

Exploring the redox processes in this reaction

It is worthwhile spending some time sorting out what the reducing agent is in these reactions, because at first sight there does not appear to be one! Or, if you look superficially, it seems as if it might be oxygen! But that's silly! We'll start by looking at the second reaction because it is much easier to see what is happening.

Let's look at the oxidation states of everything.

The oxidation states of the elements oxygen (in the gas) and copper (in the metal) are 0.

In sulfur dioxide, the oxygen has an oxidation state of -2 and the sulfur +4.

The other reaction is more difficult to deal with, because you can't work out all of the oxidation states by following the simple rules - there are too many variables in some of the substances. You have to use some chemical knowledge as well.

Extracting of Copper from Other Ores

Copper can be extracted from non-sulfide ores by a different process involving three separate stages:

Reaction of the ore (over quite a long time and on a huge scale) with a dilute acid such as dilute sulfuric acid to produce a very dilute copper(II) sulfate solution.

Electrolysis of the new solution. Copper(II) ions are deposited as copper on the cathode (for the electrode equation, see under the purification of copper below). The anodes for this process were traditionally lead-based alloys, but newer methods use titanium or stainless steel. The cathode is either a strip of very pure copper which the new copper plates on to, or stainless steel which it has to be removed from later.

When copper is made from sulfide ores by the first method above, it is impure. The blister copper is first treated to remove any remaining sulfur (trapped as bubbles of sulfur dioxide in the copper - hence "blister copper") and then cast into anodes for refining using electrolysis.

The purification uses an electrolyte of copper(II) sulfate solution, impure copper anodes, and strips of high purity copper for the cathodes. The diagram shows a very simplified view of a cell.

At the cathode, copper(II) ions are deposited as copper.

At the anode, copper goes into solution as copper(II) ions.

For every copper ion that is deposited at the cathode, in principle another one goes into solution at the anode. The concentration of the solution should stay the same. All that happens is that there is a transfer of copper from the anode to the cathode. The cathode gets bigger as more and more pure copper is deposited; the anode gradually disappears. In practice, it isn't quite as simple as that because of the impurities involved.

What happens to the impurities?

Any metal in the impure anode which is below copper in the electrochemical series (reactivity series) does not go into solution as ions. It stays as a metal and falls to the bottom of the cell as an "anode sludge" together with any unreactive material left over from the ore. The anode sludge will contain valuable metals such as silver and gold.

Metals above copper in the electrochemical series (like zinc) will form ions at the anode and go into solution. However, they won't get discharged at the cathode provided their concentration does not get too high. The concentration of ions like zinc will increase with time, and the concentration of the copper(II) ions in the solution will fall. For every zinc ion going into solution there will obviously be one fewer copper ion formed. (See the next note if you aren't sure about this.) The copper(II) sulfate solution has to be continuously purified to make up for this.

Amongst other things copper is used for:

electrical wiring. It is a very good conductor of electricity and is easily drawn out into wires.

domestic plumbing. It does not react with water, and is easily bent into shape.

boilers and heat exchangers. It is a good conductor of heat and does not react with water.

making brass. Brass is a copper-zinc alloy. Alloying produces a metal harder than either copper or zinc individually. Bronze is another copper alloy, but with tin.

coinage. In many countries, as well as the more obvious copper-colored coins, "silver" coins are also copper alloys - this time with nickel; these are known as cupronickel alloys. UK pound coins and the gold-colored bits of euro coins are copper-zinc-nickel alloys.