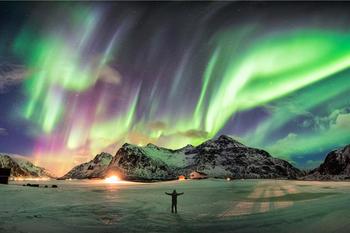 For years, scientists hadn't been able to confirm how the northern lights cast their spectral glow across the sky. But they'd long held a theory. First, eruptions on the sun release steam-charged particles called the solar wind. Those particles interact with Earth's magnetosphere- the region around the planet controlled by its magnetic field. In the process, the field launches powerful electromagnetic waves in the direction of the Earth's surface. Electrons then hitch a ride on these waves and surf their way towards the Earth's atmosphere. Once there, they collide with atoms and molecules in the brilliant light show known as Aurora.

But scientists struggled to prove this theory for decades. The space involved is far too vast to create inside a lab, and spacecraft technology only enables researchers to measure electrons and electromagnetic waves separated at different altitudes.

Recently, however, scientists managed to simulate the conditions that produce an Aurora inside a vacuum chamber. In a new study, they reported that the predominant theory is indeed correct. Electromagnetic waves called Alfven waves transfer energy to electrons, giving the particles an accelerated push towards Earth. Electrons can then surf the waves, ultimately reaching speeds of up to 45 million miles per hour.

"The idea that these waves can energize the electrons that create the Aurora goes back more than four decades, but this is the first time we've been able to confirm definitely that it works," Craig Kletzing, a physics professor at the University of Lowa, who co-authored the study said in a statement.