Testes sacs: There are 2 pairs of testis sacs on the 10 and 11 segments. Testes sacs are white or yellow in color.  The cavities of 2 testes sacs of the same segment communicate with each other.

Testes: Testes are male gonads. There are 2 pairs of testes in the 10 and 11 segments inside the testes sacs. Testes are attached to the anterior wall of the testes sacs. Each testes contains 5-8 finger like projections. The process of formation of sperms from the testes is called spermatogenesis. In case of earthworm testes produce immature sperms.

Prostate glands: There is a pair of large, flat, white and irregular structure called prostate gland. Prostate glands start from 16-17 segment up to 20 or 21 segment. From the prostate glands large ducts arise which are called common spermatic and prostate ducts. These ducts opens in the 18 segment as male genital pores. Through these pores male gametes are discharged. 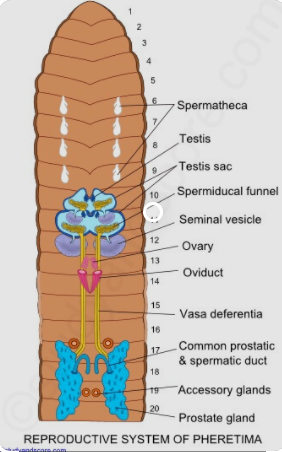