In the English language, there are two ways of conveying what someone else has said: direct/quoted speech and indirect/ reported speech.

is spoken or written text that reports speech or thought in its original form phrased by the original speaker; in narrative, it is usually enclosed in quotation marks but can be enclosed in guillemots. The cited speaker is either mentioned in the "he/she says" or implied.

• “There’s a cockroach in the kitchen!” screamed Hari.

Note that in this type of speech, a comma is most often used before starting the exact quote within the inverter commas.

In linguistics, indirect speech (also reported speech or indirect discourse) is a grammatical mechanism for reporting the content of another utterance without directly quoting it. For example, the English sentence.

• Mom told him that she was sad.

• He told me that he was tired.

• Dad was speaking on the telephone.

Note that the verb tense necessarily changes in reported speech. This is because when we report speech, we are talking, obviously, about something that was said in the past. Hence, it becomes necessary to use the past tense of the verb. 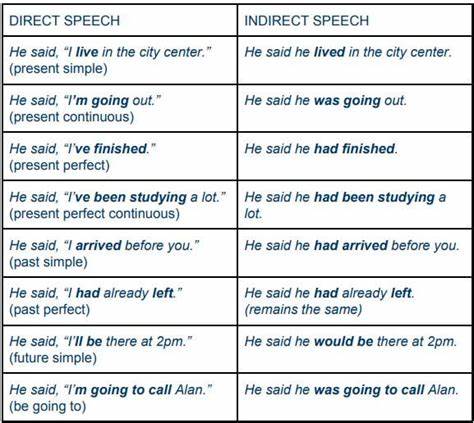