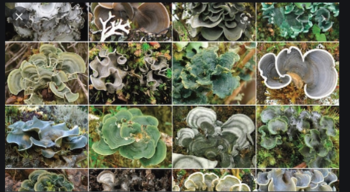 The term lichen is derived from Greek word 'Leprous ' which refers to medicine used for the treatment of skin diseases. The term lichen (SHILAPUSHPA) was used for the first time by Theophrastus (371-284 BC) to denote superficial growth on barks of trees. Lichens are a distinct group of plants or dual or composite macro-organisms made by the symbiotic association of algae and fungi.

Relationship between algae and fungus is mutualism as both gain benefits i.e. alga supplies food for the fungus while the fungus holds lichens firmly on substratum and absorbs mineral salts for the algae to prepare food. Lichens are also called "fungi parasitizing algae '. The algal component of lichens is called phycobiont and the fungal component is called mycobiont. Phycobionts belong to the members of green algae and blue geen algae. Trebouxia, Chara , Chlorella Cladophora , etc. are common genera of green algae found in 80% of lichens while 20% lichens contain blue green algae like Nostoc , Anabaena, Scytonema etc. Mycobionts are usually members of ascomycetes and basidiomycetes . Most of the lichens contain the members of the class ascomycetes while the remaining contain the members of basidiomycetes and other classes of fungi.

A Swiss Botanist Simon Schwendener (1867-68) first studied and described the true nature and relationship between alga and fungus as helotism i.e a master and slave relationship in lichens . Anton Von De Bary (1887) described the association as symbiosis. The study of lichens is called lichenology. The person sho studies lichens is known as lichenologist. Achatiin is known as the father of lichenology. According to Chapin (1980), lichens are defined as the symbiotic associations of algae and fungus characterized by low growth rates and nutrient requirements that enable them to play the role of pioneer vegetation in the colonization of fresh rocks. Lichens are small, non-vascular, multicellular eukaryotes and their plant body is a thallus. The thallus is irregular in shape and different in terms of colour.

1. Lichens are a group of composite thalloid plants, formed by the association of algae and fungi.

2. The algal partner (Phycobiont), produced carbohydrate through photosynthesis, is utilised by both and the fungal partner (Mycobiont) serves the function of absorption and retention of water.

3. Based on the morphological structure of thalli, they are of three types: crustose (crust like), foliose (leaf like) and fruticose (shrubby).

4. The growth of lichen is very slow; they can survive in adverse conditions with high temperature and dry condition.

6. Most of the lichens are ascolichens which are in intimate association of green algae and ascomycetes.