DC circuit And Its Types 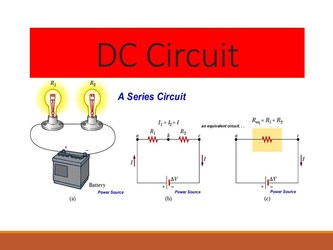 A simple DC circuit is shown in the figure below which contains a DC source (battery), a load lamp, a switch, connecting leads, and measuring instruments like ammeter and voltmeter. The load resistor is connected in series, parallel or series-parallel combination as per requirement. 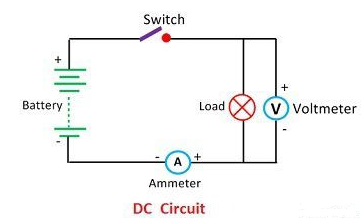 ﻿Types Of DC Circuit-﻿DC Circuit is mainly classified into 3 types:

﻿When all the resistive components of a DC circuit are connected end to end to form a single path for flowing current, then the circuit is referred to as a series DC circuit. The manner of connecting components end to end is known as a series connection.

The figure below shows the simple series circuit. In the series circuit the resistor R1, R2, and R3 are connected in series across a supply voltage of V volts. The same current I is flowing through all the three resistors. 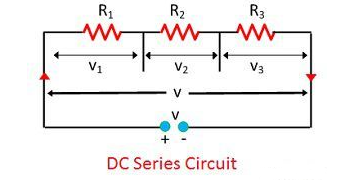 Let R be the total resistance of the circuit then,

In such type of circuit all the lamps are controlled by the single switch and they cannot be controlled individually. The most common application of this circuit is for decoration purpose where a number of low voltage lamps are connected in series.

The figure shows a simple parallel circuit. In this circuit the three resistor R1, R2, and R3 are connected in parallel across a supply voltage of V volts. The current flowing through them is I1, I2 and I3 respectively. 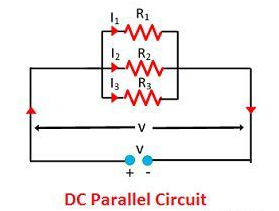 The total current drawn by the circuit is

Let R be the total or effective resistance of the circuit, then

All the resistance is operated to the same voltage, therefore all of them are connected in parallel. Each of them can be controlled individually with the help of a separate switch.

The two groups of resistor RAB and RBC are connected in series with each other across the supply voltage of V volts. The total or effective resistance of the whole circuit can be determined as given below:

Total or effective resistance of the circuit,