General Principles of Extraction of Metals

↪ In general, there are three major metallurgical operations for the extraction of a metal from its ore.
↪ Those are:

Depending upon the nature of ore, metal and impurities, general principles involved behind each of the operations are described below:

↪ The collected big lumps of ore are crushed in jaw crushers and then pulverized in ball mills or stamp mills.
↪ The powdered ore is then taken for concentration.

↪ The process of removal of impurities like sand, rocky materials, earthy particles etc. are removed from powdered ore is known as concentration.
↪ In this operation, percentage of the metal in the ore is increased.
↪ Hence it is called concentration process.
↪ Concentration is carried out by any one of the following methods:

↪ The process of picking up impurities from ores by hand is termed as hand picking.
↪ It is done when the impurities are quite distinct and large in the size.

↪ The process of separation of impurities (gangue particles) from the ore due to their different specific gravity is known as gravity separation.
↪ In this process, the lighter gangue particles are washed away by upward stream of running water while heavier ore particles settle down and removed from the base.

↪ This process is commonly employed for the concentration of sulphide ores like zinc blende (Zns), Galena (PbS),Cinnabar (HgS).
↪ In this process, the ore is mixed with water containing a little pine oil in a big tank and agitated by blowing blast of air.
↪ The ore particles come to surface along with froth and are skimmed off while gangue particles settle down at bottom. 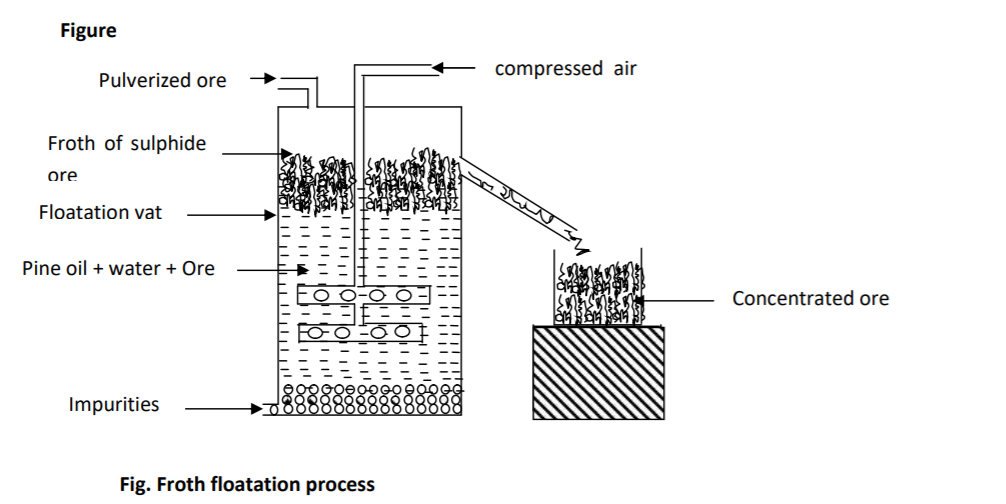 ↪ This is the chemical method in which ore is treated with a suitable chemical reagent which selectively reacts with desired metallic compound of the ore leaving behind impurities.
↪ Then the metallic compound is separated from impurities by filtration process.
↪ For example,
When bauxite ore is treated with conc. NaOH solution, aluminum oxide is dissolved leaving behind insoluble impurities, which are then removed by filtration