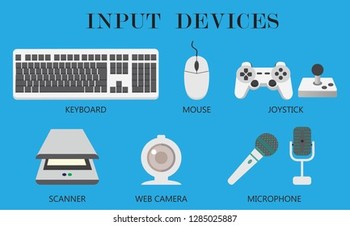 ﻿﻿Keyboard is one of the primary input devices in a personal computer. It enables the user to enter data and commands into a computer for processing system. Modern keyboard connects with the computer CPU by cable or  by infrared transmitter. The layout of keys on the modern -day English keyboard is called QWERTY design. 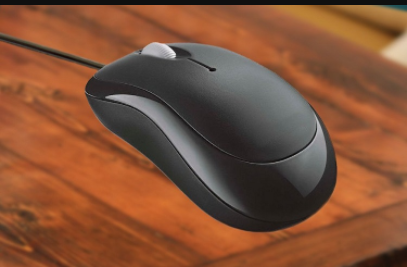 ﻿Computer mouse is a small, palm-sized, plastic device. Mouse is a point  and click input device with two or three buttons. There are many technologies applied in designing of mouse. The optical mouse is based on laser technologies. It is used to make menu selection and draw freehand shapes on  a screen. Nowdays,  we can get wireless mouse that works using electromagnetic wave like remote controller of TV system.

﻿Image scanner is a light-sensing device that translates images and other printed information into digital form so that they can be stored or manipulated by the computer. There are four types of scanners, They are flatbed scanner, sheet fed scanner, drum scanner, and handheld scanner. Among these, drum scanners are the most expensive and also give the best performance.

﻿Joystick is a pointing device which is mainly used for interaction with computer games. Joysticks are often used to control video games, and usually have one or more push-buttons whose state can also be read by the computer. It also normally has additional buttons or switches that are used in addition to stick. Joysticks are also used for controlling machines such as cranes, trucks, underwater unmanned vehicles, wheelchairs , surveillance cameras, and zero turning radius lawn mowers.

Light pen is a light-sensitive pen-like device used to point to displayed objects and to draw images on the screen. It is used to draw diagram on VDU ( Visual Display Unit ) directly. It is connected with VDU. The pen contains a photocell placed in a small tube. As the user touches the point of the pen over the surface of the screen, it detects the light emitted from the screen.