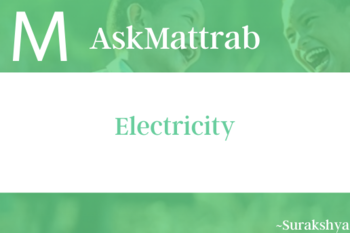 A form of energy resulting from the existence of charged particles (such as electrons or protons), either statically as an accumulation of charge or dynamically as a current is known as electricity. There are two types of electricity they are:

Electrostatics is the study of electric charges at rest. Here we study the forces, fields and potentials associated with a static charge.

The study of electric charges in motion is called current electricity.

The charged particles which by flowing in definite direction set up an electric current are called current carriers. the different types of current carriers are as follows:

In metal, the electric current is due to the flow of electrons.

In semiconductors, electrons and holes are the charge carriers.

In electrolytic liquids, the charge carriers are positively and negatively charged ions.

In ionized gas, positive and negative ions and electrons are the charge carrier.